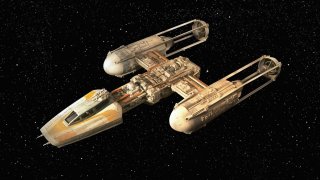 Need something to occupy your time while you’re stuck at home social-distancing because of the coronavirus? How about a Twitter thread about the history of Star Wars’ Y-wing fighter-bomber?

That thread about the iconic fictional space-fighter, dozens of tweets long, put French writer Pierre Salard on the proverbial map in the weird little world of people who obsess over pretend spaceships.

Salard is a writer for the French science-fiction magazine Geek le Mag. His Twitter account combines his two jobs. Sci-fi things that fly.

He peeks behind the scenes of famous movies and shows to reveal just how the crew actually shot their make-believe ships.

The two-day Y-wing threat that Salard launched on Oct. 20, 2019 does all these things. “It literally took days of research and work,” Salard tweeted.

He begins by summarizing the twin-engine Y-wing’s in-universe history. “Manufactured by Koensayr Manufacturing, the Y-wing is a multi-role starfighter, but mainly a bomber. During its long career ... it has seen many models. We will focus on the best-known.”

The thread then highlights the main models of space-fighter, which most famously played a role in the Rebellion’s desperate attack on the planet-killing Death Star in 1977’s Star Wars.

Each fictional fighter has its own rich history, on and off the screen or page. And Salard recounts them all.

It all began in 1974, when a young George Lucas began pre-production on the movie that would become Star Wars. “Lucas knows his movie (then far from the one we know) will need a few starfighters.” With $15,000 from 20th Century Fox, Lucas hires, among others, artists Ralph McQuarrie and Colin Cantwell.

To help McQuarrie and others get started, Lucas sketched some preliminary designs on a legal pad, including the so-called “RF-3 World War II Torpedo Fighter,” which Salard noted would become the Y-wing.

"George wanted the Y-wings to be like a [World War II] Grumman TBF torpedo bomber, which had a gunner in the belly, facing back to cover the tail and on top, then the pilot facing forward,”  Cantwell explained. “So the Y-wing could have that kind of interaction between three people on it.”

Cantwell grabbed random parts from off-the-shelf plastic model kits and glued together with a rough concept model with two tube-shaped engines, a long fuselage and three seats for crew.

McQuarrie refined the design on paper, using the initial model as inspiration. In February 1975 McQuarrie completed his paper design and produced a famous painting depicting the Y-wing as the world would come to know it.

Lucas handed off the design to his effects company Industrial Light and Magic. ILM model-maker Joe Johnston, who later in life would become an accomplished movie director in his own right, helped to make the final scale-models for the Y-wings that actually would appear in Star Wars.

Two years later in May 1977, moviegoers all over the world watched as the Y-wings assaulted the Death Star. With disastrous results for the Y-wing crews, of course.

And that’s just one of the hundreds of sci-fi stories Salard has told on his incredible Twitter feed.