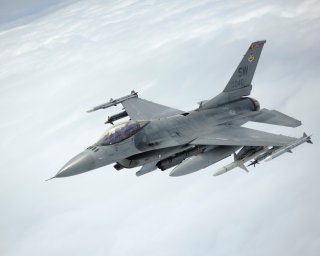 “It is the smallest, lightest, high energy laser of its power class that Lockheed Martin has built to date,” Tyler Griffin, a Lockheed executive, explained to reporters earlier this month. “It is a critical benchmark in developing an operational laser weapon system in the airborne domain,” he added.

Though there are several laser weapon programs in the works with the U.S. Navy and U.S. Army, the U.S. Air Force airborne laser initiative is particularly challenging due to limited fuselage real estate to mount a laser weapon and limited organic power generation to fire the weapon compared to large destroyers and potentially nuclear-powered aircraft carriers in the future.

However, this latest U.S. Air Force laser weapon is just “one-sixth the size of what we produced for the Army going back to just 2017,” Mr. Griffin explained, adding that the laser initiative is called LANCE.

The LANCE acronym stands for Laser Advancements for Next-generation Compact Environments; the Air Force awarded the program contract to Lockheed Martin in 2017 under the auspices of the Air Force’s Self-Protect High Energy Laser Demonstrator, or SHiELD, program.

The acting director of AFRL’s directed energy directorate, Kent Wood, explained to Breaking Defense that the components and systems that went into the laser “represent the most compact and capable laser weapon technologies delivered to date.”

Mr. Wood added that “mission utility analyses and wargaming studies are ongoing, and will help determine how these subsystems and/or an integrated laser weapon system might potentially be used. Specific targets for future tests and demonstrations will be determined by the results of these studies as well.”

Still, the LANCE laser is a ways away from becoming integrated into U.S. Air Force jets and won’t be introduced into service anytime soon—though future iterations of the laser could be.

“A variety of potential applications and platforms are being considered for potential demonstrations and tests, in partnership with our warfighter stakeholders,” Griffin said.

“At this time, no decision has been made on a specific application or platform for these follow-on activities, no flight demonstration is funded and there is no direct transition plan into a program of record,” He added.

Depending on how the LANCE laser performs, the Air Force could soon be one step closer to mating a laser pod to a tactical piloted or unpiloted aircraft.