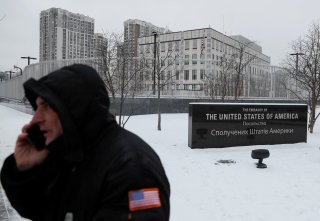 The U.S. government has ordered the families of all resident American diplomats at the U.S. Embassy in Kiev, Ukraine, to leave the country. The order comes as the United States continues to evaluate the threat of possible violence in coming weeks in Ukraine.

The State Department announced the decision on Sunday. The statement also indicated that non-essential embassy staff could (but were not required to) leave Ukraine and return to the United States at the State Department’s expense. It also recommended that any Americans remaining in the country depart immediately.

These moves have been driven by speculation that Russia, which has massed more than 100,000 of its troops along Ukraine’s northern and eastern border, intends to invade the country in the coming weeks.

“Military action by Russia could come at any time and the United States government will not be in a position to evacuate American citizens in such a contingency,” a statement from the embassy said. “U.S. citizens currently present in Ukraine should plan accordingly.”

Debate has raged in Washington over which resources, if any, the United States should devote to discourage Russia from invading Ukraine. In an interview with CNN on Sunday, Secretary of State Antony Blinken pushed back against the idea of immediate sanctions on Russia, suggesting instead that they should instead be used as an economic punishment for a Russian invasion.

“When it comes to sanctions, the purpose of those sanctions is to deter Russian aggression,” Blinken said.

“And so if they are triggered now, you lose the deterrent effect.”

“We need to be very aggressive in pushing back against President Putin, whether that’s in the form of sanctions, expulsion from the SWIFT banking system, sanctions on the Nord Stream 2 pipeline,” Sen. Joni Ernst (R-IA) said in an interview with ABC News. “All of these actions need to be put into place. … Diplomacy is very important at this point, but also showing a strong resolve from the United States of America. So far with this administration, we have seen a doctrine of appeasement and that certainly is not going to deter President Putin and Russia from invading Ukraine. So let’s make sure that we are pushing back right now with stiff sanctions, making sure we are showing Putin that we mean business.”

Others, including Sen. Chris Coons (D-DE), have pushed for small sanctions immediately, but with larger ones held in reserve in case of Russian military action in Ukraine.

Russia has repeatedly insisted that it is not preparing to invade, and has defended its sovereign right to position its troops within its country free of outside influence.