Stealth Can't Stop This: What Could Kill the F-35 Program (and Aircraft Carriers) 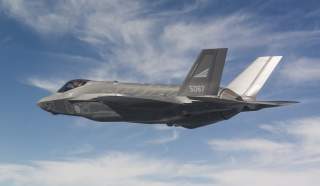 Politically and institutionally, it is hard to imagine the Pentagon halting flagship projects like the F-35. Nonetheless, with the federal deficit growing, the military is likely to see some lean years.

Is it worth sacrificing some F-35s and aircraft carriers to trim the federal budget deficit?

That’s one option on the table, according to the Congressional Budget Office. The CBO estimates that if current spending continues, the $779 trillion deficit in 2018 will double to $1.4 trillion by 2028, which means the share of GDP eaten up by debt soaring 3.8 percent today to 4.8 percent.

With numbers like that, hundred-million-dollar warplanes and $13 billion aircraft carriers become tempting targets for the budgeteer.

In a new report titled “Options for Reducing the Deficit: 2019 to 2028.” CBO presented 40 options for reducing the budget shortfall, including the always-popular tax hikes and cutting entitlement programs. But with the Department of Defense consuming $764 billion of the 2019 budget, it is inevitable that the Pentagon will share the pain.

One possibility is to replace 80,000 active-duty personnel with 64,000 civilian contractors. While the Department of Defense has done this before -- and drawn much criticism for allegedly maximizing corporate profits at the expense of military efficiency – CBO says that only a small fraction of positions filled by active-duty soldiers have been reviewed for whether civilians could fill them. This would save $14 billion between 2019 and 2028.

Another option is to save $16 billion per year by not buying any more F-35s, and instead using older designs. “Under this option, DoD would halt further production of the F-35 and instead purchase the most advanced versions of older, non-stealthy fighter aircraft that are still in production,” CBO explained. “Through 2028, the Air Force would purchase 510 F-16 Fighting Falcons, and the Navy and Marine Corps would purchase 394 F/A-18 Super Hornets. Those purchases would occur on the same schedule as that currently in place for the F-35s. The services would continue to operate the 429 F-35s that have already been purchased.”

“An advantage of this option is that it would reduce the cost of replacing DoD’s older fighter aircraft while still providing new F-16s and F/A-18s with improved capabilities—including modern radar, precision weapons, and digital communications—that would be able to defeat most of the threats that the United States is likely to face in the coming years,” CBO added. “The F-35s that have already been purchased would augment the stealthy B-2 bombers and F-22 fighters that are currently in the force.”

Another $18 billion would be saved ff the Navy stops building Ford-class aircraft carriers after the third vessel in the series is completed. CBO points out that the existing fleet and the carriers under construction would maintain the current size of the carrier force for a long time because the ships are designed to operate or 50 years,” CBO said. “Three Ford class carriers, including the Enterprise, have been delivered or are under construction. They will replace the first three Nimitz-class carriers when they are retired in the 2020s and early 2030s; so as late as 2036, the Navy would still field 11 carriers under this option.”

Other options include canceling development of the B-21 stealth bomber, slashing the Navy’s ambitious plan to buy 301 ships over the next 30 years, and reducing the number of nuclear weapons.

To be fair to the CBO budgeteers, they didn’t study their spreadsheets wearing rose-colored glasses. The report acknowledges that the various options could backfire. Improved air defenses could make the U.S. regret returning to non-stealthy aircraft, while freezing aircraft carrier construction after the third Ford-class ship would result in the Navy declining to just six carriers by 2048.

Politically and institutionally, it is hard to imagine the Pentagon halting flagship projects like the F-35. Nonetheless, with the federal deficit growing, the military is likely to see some lean years.