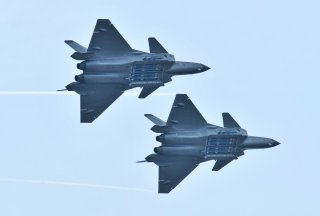 Officially established in November 1949, the PLAAF is now composed of five branches, which include aviation, anti-aircraft artillery, surface-to-air missiles, radar and an Airborne Corps. It is the largest air force in Asia.

This week three of China’s five military regions have mounted air combat readiness drills in a show of force as tensions rise with the United States in the South China Sea. The Haike News, a news app operated by the overseas edition of the Communist Party mouthpiece People’s Daily, posted a video that showed various aircraft including a Su-30 fighter flying in the region. This latest exercise reportedly lasted more than ten hours and involved mid-air refueling.

South China Morning Post reported that the PLAAF aircraft were flying to Subi Reef, the South China Sea atoll that the Chinese military expanded into an artificial island. Subi Reef is currently controlled by Beijing but the area is also claimed by Vietnam, the Philippines and Taiwan.

Another video released by Haike News also showed a PLAAF pilot warning off another aircraft from entering Chinese territorial airspace, but the authenticity of the video has not been confirmed.

China National Radio has also reported that two bombers from the Southern Theatre Command, which oversees China’s armed forces operations in the South China Sea, sortied two bombers for day and night combat training. However, the announcement did not disclose where the bombers operated during the exercises.

The PLAAF has also been engaged in a dogfight of sorts with India Forbes.com reported. However, it isn’t over the skies of the India Ocean or the disputed Line of Actual Control—rather it is a war of words being conducted on the airwaves and in the respective media of the two nations.

Both nations are claiming their respective newest jet fighter is superior to its rival.

Indian Air Force chief B.S. Dhanoa apparently initiated the hostilities when he claimed that India’s new French-made Rafale fighter jet was far more advanced than China’s new J-20 stealth fighter. The Rafale incorporates stealth technology including wings and fuselage that are composed of radar-absorbent composite materials and lightweight titanium, but it is not a truth stealth aircraft like the American-made F-22 Raptor or F-35 Joint Strike Fighter.

India deployed the first five Rafales, which arrived last week to the Ladakh area of the Himalayas where the two nations engaged in clashes in June.

China’s state-owned Global Times fired back and noted, “Chinese experts said that the Rafale is only a third-plus generation fighter jet, and does not stand much of a chance against a stealth, fourth-generation one like the J-20.”

With the Chengdu J-20, China has become only the second country in the world to field a domestically-designed and produced stealth fighter. The platform is far from perfect. While the Chinese fighter has similarities to the U.S. Air Force’s F-22 Raptor, the Chengdu J-20 however, lacks supermaneuverability thanks to its traditional exhaust nozzles and underpowered engines. In addition, Beijing struggled to domestically produce a sufficiently-powerful engine for the J-20, and China has opted for a foreign design from Russia to improve the aircraft’s performance.

For now, the J-20 and Rafale haven’t engaged in the air just the airwaves, but both countries seem to believe they have the better aircraft.