Stealth Chopper: The Secret Technology Behind the Bin Laden Raid Is Back 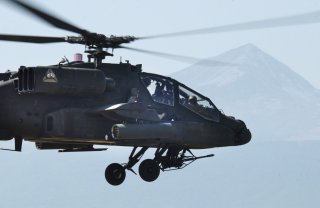 At the Farnborough International Airshow happening in the UK this year, GKN Aerospace, a British automotive industry company, made a big announcement. The company revealed that it had signed an extension to a long-term agreement with a Lockheed Martin Company-Sikorsky, to supply composite structure elements for the H-60 Black Hawk chopper.

This development regarding the enigmatic Black Hawks has an interesting connection with one of the most celebrated operations conducted by the U.S. Armed Forces—the killing of Osama Bin Laden.

The operation that resulted in the death of bin Laden used stealthy helicopters to reach as close to the 9/11 mastermind's specific location in Abbottabad as possible. It was later revealed that the choppers used were the Stealth Black Hawks—an aircraft whose existence hadn't even been acknowledged before this operation.

The Stealth Black Hawks used in this raid are believed to be based on the special ops MH-60 airframe. Rare imagery of the chopper suggests that they were an intensely modified version of a Sikorsky UH-60A or a UH-60L model. Both these models come equipped with renditions of the AN/ALQ-151 Quick Fix System. The system has electronic warfare (EW) jamming capabilities and the capability to intercept electronic emissions and uncover their source.

It is also believed that some modifications were added to improve radar signature reduction and limit the helicopter's weight—thus leading to the creation of the Stealth Black Hawk. Photos suggest that the engine intake and exhaust fairing have also been modified to reduce the aircraft's radar reflectivity.

In the bin Laden raid, one of the Black Hawks got damaged while landing. This happened despite the best helicopter operators and repeated practice in mock-ups. The stated reason was that the choppers reacted differently in an enclosed compound with rising heat. The U.S. military blew up the chopper to prevent any form of reverse engineering or data gathering. However, the tail of the aircraft remained more or less intact. The interesting thing is that the wreckage of the tail section bore no resemblance to the other Sikorsky models.

Like everything else about the chopper, the information about the Stealth Black Hawk's tailcone is quite limited. Images from the aftermath of the bin Laden operation show that the tail rotor of the crashed chopper had a five-bladed assembly. The aircraft also had a vertical tailplane that has an even chord from top to bottom capped off with what seemed to be a sizeable aerodynamic surface.

In 2007, it was reported that GKN Aerospace, in collaboration with Sikorsky Aircraft and the U.S. Army's ManTech Program Office, had finished the design, development, and manufacturing of the UH-60 Common Composite Tailcone (CTC) test units for Black Hawk helicopters.

This all-composite tailcone boasted reduced weight, courtesy of the use of advanced, lightweight material X-Cor throughout the segments of the assembly. This is a tailored material that substitutes traditional honeycomb in sandwich structures. The CTC was up to the mark when it came to tooling and manufacturing costs, too. The program used a Reduced Tooling Concept to employ an improved manufacturing approach. This resulted in the number of tools being reduced by over 70 percent while also producing a highly repeatable, close tolerance structure. The consequence of integrating automated fiber in the manufacturing of the tailcone skins was—among providing high-quality, repeatable laminates—the reduction in costs.

At the time, this effort to develop this tail for the Black Hawk was considered a pioneering program. A multitude of new techniques and materials were used. This also ended up in a valuable database of knowledge and understanding being created for everyone involved in the team. At that point, one viewpoint obviously considered the benefits that the database would bring for Sikorsky and the U.S. government. An important benefit was the kind of support these technologies could offer to other components of the aircraft, and to the development of other aircraft as well.

It is now easy to surmise that the impressive stealth of the Stealth Black Hawks (which neither bin Laden and his neighbors nor Pakistan's armed forces could hear/detect) used the expertise collected during the Black Hawks' helicopter development. The knowledge of lightweight materials, for instance, was combined with the radar signature-reduction benefits that the design changes in the tail provided.

It is interesting to note that the extensive use of past experience, and expertise in just the tail of the chopper was so extensive that when reports of the Chinese getting their hands on this particular piece of wreckage surfaced, experts went so far as to say that it had given Beijing at least a decade's worth of knowledge on stealth application on helicopters.

While the Black Hawks—stealthy or otherwise—remain elusive, the announcement of agreements such as this could still be taken as hints on whether research and development on the technology is ongoing. Beyond such speculation, enthusiasts are left wanting for official announcements and solid proofs regarding this iconic aircraft.