Stealth F-35s and Lasers: How America Could Destroy a Nuclear Missile 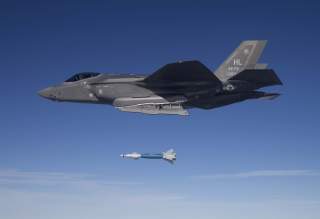 Destroying ICBMs is something quite different than tracking or intercepting a short or medium range ballistic missile. The F-35 is already developed in this capacity; the F-35 has been tested as an aerial node for the Navy’s Naval Integrated Fire Control - Counter Air system.

Washington, DC-The Pentagon is working with industry to explore the possibility that bomb, missile or laser-armed F-35s could destroy an attacking nuclear-armed Intercontinental Ballistic Missile (ICBM) targeting the US, potentially bringing a new dimension to existing defenses.

The idea would be to use F-35 weapons and sensors to detect or destroy an ICBM launch during its initial “boost” phase of upward flight toward the boundary of the earth’s atmosphere.

“We are excited about the concept,” a Senior Pentagon official told Warrior Maven.

The F-35, officials explain, could use a “kinetic” solution wherein it fires upon and destroys a launching ICBM -- or a “sensor” solution where it “cues missile defense systems,” locating or stopping attacks earlier than might otherwise be possible.

”We are now looking at how we could close the kill chain on that process,” officials familiar with the ongoing exploration told Warrior Maven.

One senior DoD official explained that the prospect of F-35 missile defense would likely hinge upon key intelligence information; should there be an indication or concern regarding a possible enemy launch, F-35C-armed carriers or other F-35s in the vicinity could use speed, stealth and sensor technology to find, ID and destroy an ICBM.

The prospect of using an F-35 for this purpose introduces a range of defensive possibilities not yet part of the Pentagon’s missile defense arsenal. For instance, an F-35 could fire air-to-ground bombs or missiles to explode the ICBM during or just after launch. An F-35 might also use lasers and electronic warfare to incinerate, jam or disable the flight trajectory of an attacking ICBM. If an ICBM guidance system, or propulsion mechanisms were interfered with, an ICBM might be thrown off, heading into the ocean or an uninhabited area less likely to cause damage.

Also, a group of F-35s could potentially form some kind of networked “relay system” using the Multi-function Advanced Data Link (MADL) to deliver threat information across a fleet of aircraft in position to warn US missile defense systems. This MADL data link, which enables a group of F-35s to all see the same thing in real-time while conducting a mission, could potentially extend the range of systems able to find or detect an enemy ICBM. It goes without saying that the earlier Combatant Commanders and decision-makers learn of an attacking ICBM, the more time they have to consider and implement countermeasures or launch a counterattack.

“The F-35 could use its stealth configuration and maneuverability to get closer to ICBM launch points originating in enemy territory,” Loren Thompson, Chief Operating Officer of the Lexington Institute, told Warrior Maven.

Also, a 2014 Congressional Report, the US-China Economic and Security Review, contained a 70-page chapter on Chinese military modernization. Among its many findings, the report specifically cited Chinese “mobile” ICBM launchers with as many as 10 “reentry vehicles” in some cases. These weapons, of course, present significant new threats; the more reentry vehicles approaching a target, the more difficult the defense. With this in mind, an F-35 might bring an ability to use stealth, speed and maneuverability to operate above heavily defended inland areas to find, chase and destroy mobile launchers.

The initial launch or “boost” phase of an ICBM, it appears, would present the best opportunity for an F-35 to have the intended missile-defense impact. Hitting an ICBM attack during the final, or “terminal” phase, Thompson said, would present challenges due to the hypersonic speeds at which the reentry vehicles are moving. All of this raises the question as to whether an F-35 could be part of an integrated system able to detect and knock out enemy ICBMs while they are traveling in space. While difficult, it might someday be possible for an F-35 to use GPS or other air-mounted sensors to interact with satellites - which themselves could fire some kind of interceptor to hit an ICBM during space flight. In this scenario, an F-35 would function as a sensor or networked “node” and not an actual attacker, per se.

An F-35 would bring something new to missile defense by potentially filing a needed niche or, at very least, greatly supplementing existing land-based systems. Unlike offensive nuclear deterrents such as air, sea and land weapons, US ICBM missile defense weapons are primarily land-based. A Ground Based Interceptor (GBI), for instance, stationed in Ft. Greely, Alaska or Vandenburg AFB, Calf., would fire up into space during an ICBMs mid-course phase of flight to intercept the attacking missile. This presents a number of challenges, as GBIs would need to draw upon sensors or embedded technology enabling them to distinguished decoys from actual ICBMs.

“In 2017, when we shot down an ICBM target missile, the target missile contained countermeasures in order to test the system and ensure it is able to discriminate between various objects in space and hit the reentry vehicle,” a senior Pentagon official told Warrior Maven.

The emerging prospect of advanced threats are a key reason for the Pentagon’s developing Multiple Kill Vehicle system, a technology designed to both detect and destroy multiple incoming missiles or decoys traveling through space. Multiple Kill Vehicle, as it sounds, integrates a number of interceptors onto one missile; numerous decoys flying alongside an ICBM can increase the chances that an actual nuclear weapon will continue on to its target. For this reason, Multiple-Kill Vehicle’s sensors, engineered by Raytheon, are designed to distinguish decoys from missiles - and knock out more than one threat from the same interceptor.

Regardless, identifying and knocking out large numbers of ICBMs is, by any estimation, a challenge. A single launch, from a rogue state such as North Korea only able to launch one or two ICBMs at most, presents a much more manageable threat for ground-based interceptors. An incoming salvo of ICBMs, by contrast, is a different equation. This leads to two strategies; the first would be an offensive deterrent using the US nuclear triad to stop a first strike from ever happening by ensuring a catastrophic retaliation -- and the second would encompass a range of ongoing technologically advanced defensive measures including things like satellites, lasers, Multiple Kill-Vehicles or F-35s.

Destroying ICBMs is something quite different than tracking or intercepting a short or medium range ballistic missile. The F-35 is already developed in this capacity; the F-35 has been tested as an aerial node for the Navy’s Naval Integrated Fire Control - Counter Air system. This technology, now deployed, uses ship-based Aegis radar, an aerial sensor node and a guided SM-6 missile to knock out attacking missiles from ranges beyond-the-horizon. Since its inception, NIFC-CA used an E-2 Hawkeye surveillance plane as the aerial node. Now, the system can use a far more capable F-35 as the aerial sensor.