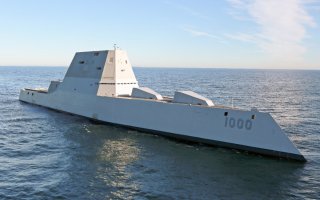 The U.S. Navy’s sleek Zumwalt-class destroyers are intended to accomplish the impossible: fighting at sea while evading enemy radars. Indeed, Navy designers have worked hard to engineer a large metal warship with stealth characteristics. While it is not likely to be completely invisible to radar and sensor systems, the Zumwalt-class has a much smaller radar signature than other large warships.

Structures with sharp angles, pointy edges, and extending vertical designs naturally offer more areas radar pings can bounce off. Low observability, by extension, happens when radar has fewer return electromagnetic pings to create a rendering of the object. Since electromagnetic pings travel at the speed of light and the travel time can be determined, a computer algorithm can calculate the shape, size, and distance of an enemy object if there are enough return signals. Acoustic pings operate within the same conceptual framework but use sound instead of electricity. Accordingly, Zumwalt engineers sought to build a ship able to elude radar and sonar detection.

Most current destroyers, for example, have multiple deck-mounted sensors, weapons systems, and angular staircases visibly positioned on the deck of the ship. None of these features, however, can be seen on the Zumwalt. Some of the Zumwalt’s weapons, for instance, are housed in cone-like structures. The fewer edges or identifiable shapes a warship has, the lower the possibility that electromagnetic signals will effectively transmit an accurate picture of the object.

Another apparent technique is the use of antennas. An Arleigh-Burke-class destroyer, for example, has multiple antennas, sensors, masts, and other narrow vertical structures with definable contours while the Zumwalt does not. Additionally, the Zumwalt’s electric-drive propulsion system not only helps generate more onboard electrical power for weapons, but it is also much quieter and gives the ship a smaller signature for overhead enemy sensors and submarines to detect.

Interestingly, there are other “conceptual” parallels between the Zumwalt and stealth fighter jets. Looking at the ship’s exterior, there are very few observable sensors, weapons, antennas, or other structures, something which mirrors engineering techniques used to build stealth aircraft. Many sensors and antennas in stealth aircraft are embedded or woven “into” the skin of the aircraft. There are no visible seams or bolts holding parts of the ship together.

With these concepts in mind, it would not be surprising if many of the Zumwalt’s sensors, radar, sonar, and other key technologies were deliberately woven into the hull or exterior of the ship. Following this technical reasoning, it makes sense, for instance, that a U.S. Air Force stealth B-2 would not only have internally buried engines to lower its heat signature but also have a rounded horizontal shape with no hard edges, steep angles, or perpendicular vertical structures recognizable to enemy radar. Finally, stealth aircraft are known to use specially-engineered radar absorbing materials. While there may not be a lot of specifics regarding the exact materials used for the Zumwalt, it would certainly make sense if it were built with a radar-absorbing exterior.

U.S. Navy officials also often speak at length about the ship's growth potential or technical ability to house more electrical power and “surge” capacity for new weapons, such as lasers. The ship's Integrated Power System, electric drive, computing system, and seventy-eight-megawatt generator all create the conditions for rapid integration of laser weapons. This is quite significant for stealth designs because lasers not only bring a host of new combat attack advantages but also give off a much less detectable signature than missiles do.

So while the notion of a stealth destroyer might seem to be a contradiction in terms, Zumwalt engineers appear to have been using numerous stealth engineering techniques which, while not intended to make the ship invisible, are designed to confuse enemy sensors and wage war undetected by the enemy.