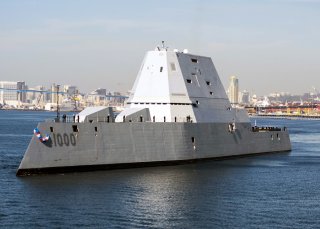 The United States Navy announced that the USS Zumwalt (DDG 1000), the first stealth destroyer, is almost fully operational. It is the lead ship of a class of next-generation, multi-mission destroyers that feature a state-of-the-art electric propulsion system, wave-piercing tumblehome hull, stealth design, and the latest warfighting technology and weaponry.

This new ship will be capable of performing a range of deterrence, power projection, sea control, and command and control missions. It was designed to operate in both the open ocean and near-shore environments.

USS Zumwalt is now almost ready for action, and this comes three and a half years after it was commissioned into the U.S. Navy in October 2016. Its combat system is currently being installed and will be completed in the coming days. Once that installation work is finished the new destroyer will fully enter service.

The ship features a streamlined, wave-piercing tumblehome hull that features a "knife-like profile," which according to various reports gives the 600-foot-long warship the radar signature of just a fishing boat.

The stability of the hull has been in question, but according to recent reports, the ship handles the seas as well – perhaps even better – as previous classes of destroyers when it was tested in January off the coast of Alaska.

However, despite its performance in rough seas, one of the outstanding questions is what exactly its mission will be. As The National Interest reported in January, "Navy developers of the new high-tech, stealthy USS Zumalt destroyers are widening the mission envelope for the ship, exploring new ammunition for its guns and preparing to fire its first missiles next year."

As a new generation of warships, each of these stealth destroyers will be fitted with two 155mm Advanced Gun Systems (AGS), which are capable of engaging targets with precision-guided shells at a range of up to 60 miles. In wartime, the destroyers would use their ability to engage targets from close to shore to create a path for an amphibious landing.

The problem is that the Long Range Land Attack Projectile, the precision-guided shell to be used in the AGS, ballooned in price from $50,000 to $800,000 for each round – making it almost too expensive to fire! The Navy has yet to find a replacement.

The USS Zumwalt is just the first of the new stealth destroyers that will see service with the Navy in the coming years. The follow-on ship, USS Michael Monsoor (DDG 1001), was commissioned in January 2019, while a third ship in the class USS Lyndon B. Johnson (DDG 1002) was christened last April.

Original plans had called for a total of 32 ships in the Zumwalt-class before that program was scaled back after the Government Accountability Office (GAO) criticized several aspects of the program. That included a lack of suitable projectile for the AGS and what was seen as an ambitious delivery schedule for future vessels in the class.