Still Relevant: The F-16 Fighting Falcon Could Fly for Another 20 Years 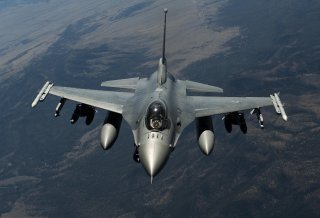 Though the F-16 Fighting Falcon fighter jet is nearly fifty years old, the U.S. Air Force anticipates flying it for quite a long time to come. This is in part because of the large number of jets already in service, and as a cost-saving alternative to the F-35 Joint Strike Fighter. Additionally, with steady upgrades, the jet has proven to be surprisingly adaptive.

The Cold War-era airplane first debuted in the 1970s as the single-engine, less capable partner to the F-15 Eagle fighter. This created a high-low pairing strategy that saw multiple F-16s flying with more capable F-15 counterparts.

“The F-16 provides the capacity in our Air Force: lots of fighters to cover all kinds of combatant commander needs,” said Col. Tim Bailey, the Air Force Life Cycle Management Center’s F-16 program manager, according to Air Force Magazine. He emphasized that the F-16 must remain “relevant,” and not just be “the F-16 of today.”

One of the upgrades F-16 fighters are enjoying is an active electronically-scanned array radar mechanism; the Air Force is installing the system “as fast as we possibly can,” Bailey explained. “We anticipate hundreds of F-16s in active service for decades to come,” possibly as far into the future as the 2040s, he added.

Bailey explained that “a few million dollars per jet gives you 20 years of life.”

“The F-16 Service Life Extension Program will keep the jets flying until nearly 2050, thanks to a partnership between the Ogden Air Logistics Complex and the Air Force Lifecycle Management Center’s F-16 Systems Program Office,” a U.S. Air Force press release from 2018 announcing the upgrade explained.

The statement added that “the program combines a dozen structural modifications into one repeatable package – from bulkheads to wings and canopy. The jets, which became operational in 1979, and were originally deemed air worthy for up to 8,000 flight hours, will have their life extended up to 12,000 flying hours – possibly more.”

Though the F-16 is no stealth fighter, upgrades to the aircraft include a Have Glass coating, a type of paint-like material that is radar absorbent and provides a certain degree of stealthiness. Still, given the F-16’s older design, it does not compare to the stealthiness of fighters like the F-22 and the F-35, which were expressly built to thwart enemy radar.

So, while the Cold War-era fighter might end up being nearly seven decades old by the time it retires, it remains a relevant fourth-generation fighter jet.