To Stop the Conflict in the South Caucasus, the U.S. Must Restrain Turkey 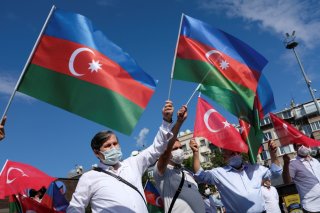 With barely any mention of foreign policy, the first 2020 U.S. presidential debate further crystalized the argument that America is dangerously distracted from world affairs. Both the Democratic and GOP party leaders are preoccupied with the upcoming elections that promise to be one of the most contested in U.S. history. This political distraction is made worse by the ongoing COVID-19 pandemic, shifting much of the national discourse towards domestic affairs.

With thousands dead due to the pandemic, nations across the globe are forced to refocus the often-scarce resources to avert collapsing health care systems. For this reason, UN Secretary-General Antonio Guterres urged an international ceasefire to instead tackle “the true fight of our lives.”

Meanwhile, NATO-member Turkey is running loose, creating major headaches for Washington. Recent discussions surrounding Secretary of State Mike Pompeo’s visit to Greece regarding the relocation of U.S. strategic assets from Incirlik Air Base to Crete do show some waning patience with Ankara, yet even if realized this may be too little too late.

Left unchecked, Ankara’s destabilizing rampage threatens to set off the geopolitical ticking bomb stretching from the Eastern Mediterranean to North Africa to the greater Near East.

Having usurped much of the state power following the alleged 2016 coup d’etat attempt, Turkish President Recep Tayyip Erdogan has been trying to realize his neo-Ottoman dreams.

First, by brazenly accusing the United States of orchestrating the coup, Erdogan has lately intensified his aggressive posturing vis-a-vis Israel, Saudi Arabia, UAE, and other pro-Western Arab states with the goal to establish himself as the new legitimate leader of the Sunni world.

Domestically, he used the coup as an excuse to initiate a nationwide elimination of political opponents, shutdown of the media, and arrest of academics and business owners to cement his one-person rule.

Facing little to no consequences for its meddling in Syria, Libya, and other hotspots, Ankara has now turned its eyes to the South Caucasus.

Turkey’s unprecedented direct, large-scale military involvement in the Armenian-Azerbaijani conflict marks the cross of a rubicon. With this tipping of scales in the regional power balance, it remains yet to be seen how chips fall along the nexus of Russian, Turkish, and Iranian interests.

Azerbaijan’s September 27 large-scale invasion of Artsakh (Armenian historic toponym for Nagorno-Karabakh) in conjunction with Erdogan’s transfer of 4,000 Islamist terrorists from Syria to Azerbaijan as well as Turkey’s use of American-made weaponry including F-16 fighter jets, mark the biggest flareup of the conflict since the signing of trilateral ceasefire agreement in 1994.

The United States has significant leverage to restrain Turkey. By putting a leash on Erdogan’s rogue adventurism, Washington can deescalate the situation to prevent the conflict from devolving into a total quagmire, which is exactly what Ankara is trying to achieve.

The growing Washington consensus is that the days of Turkey as a reliable partner willing to bandwagon with the United States are over. Erdogan’s fervent anti-Americanism and overall disdain for the West have de facto turned Turkey into a regional pariah.

Once an alliance of like-minded nations, Ankara has devalued NATO, compelling many to question the raison d'etre of the organization altogether. After all, Turkey has done nothing but complicate America’s counterinsurgency operations in the Middle East, such as by supporting terrorist factions affiliated with ISIS and Al Qaeda.

Washington’s indecisiveness to contain Ankara’s belligerence runs the risk of entrapping the United States in never-ending conflicts that Turkey is facilitating.

A good starting point would be parting with illusions that Erdogan’s Turkey will eventually abandon the damaging behavior and become the democratic state that everyone hoped for.

Having sacrificed the long-term regional stability at the expense of short-term political expediency, Washington has willingly closed its eyes on Ankara’s backslide in human rights, solidification of autocracy, and an ever-apparent divergent foreign policy.

In an increasingly repressive region, America should first and foremost defend Armenia’s vibrant democracy as a beacon of freedom.

Without facing consequences, the violent aggression perpetuated by these regimes will go unabated, harming U.S. and NATO interests in the region. America must act now.