The Many Problems with Erdogan's Plan for Syria 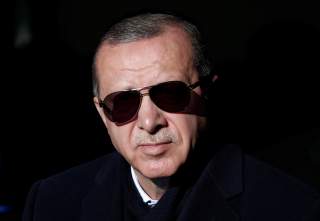 For Americans in favor of leaving Syria but with reservations about doing so, do not take solace in Turkish president Recep Tayyip Erdogan’s recent op-ed in the New York Times, for it is insincere political theater masquerading as an olive branch. For after years of working at odds with U.S. policy goals in Syria, Erdogan wrote this treatise not to support U.S. objectives, but to capitalize on an unprecedented chance to shape northern Syria and the lives of the Kurds who live there to his liking. Erdogan is now on the cusp of achieving with words what he failed to do with arms: nearly uncontested influence over the Syrian lands nearest the Turkish border, another step to his desired neo-Ottoman Empire.

All this is thanks to President Donald Trump’s recent snap decision to withdraw U.S. military forces from Syria; an inevitable (and correct) outcome given that post–ISIS Syria is not a vital U.S. national security interest and there was never enough political will—under this administration or the previous one—to fight an open-ended conflict in Syria for goals with indeterminate outcomes. That Trump’s badly botched policy process went on to engender pushback and criticism from those in Washington with the president’s ear—including Sen. Lindsey Graham and National Security Advisor John Bolton—only made it more difficult for Trump to hold true to his December announcement. Sensing a fleeting opportunity, Erdogan published his op-ed with an audience of one in mind, beginning with a frank assertion: “President Trump made the right call to withdraw from Syria.”

Ever the stalwart Western ally, Erdogan would have you believe, Turkey is the one remaining bulwark against Middle Eastern extremism and instability that can assume the American burden of defeating the Islamic State and stabilizing Syria. That Turkey was largely responsible for ISIS’ growth between 2012–2015 by leaving its border open and, at times, assisting the flow of foreign fighters and arms to Syria, is beside the point. Likewise, it is apparently taken for granted that the Turkish Armed Forces, after being gutted following the 2016 coup attempt and being distracted by Ankara’s laser-focus on the Syrian Kurds, will finish off ISIS when the senior U.S. military had difficulty doing so. In truth, since “defeating” ISIS at this point depends more on the fight for hearts and minds than on the battle for territory, Erdogan has an open-ended effort ahead of him—providing him with the perfect justification for anti-Kurdish military operations under the guise of a counterterrorism campaign.

Which is, of course, both his true intention and a completely contradictory strategy. For as Erdogan, himself, has acknowledged, ending radicalization in Syria requires “a stabilization force featuring fighters from all parts of Syrian society” and “ensuring adequate political representation for all communities.” His subsequent claim that on these issues he has “no argument with the Syrian Kurds” should not be believed. Statements from Erdogan’s Justice and Development Party (AKP) that Turkey differentiates between the Kurdish people living in Turkey and Syria (“friends”) and the Syrian Kurdish-led YPG militia and its PYD political party (“terrorists”) are hollow distinctions without practical merit. Indeed, all it would take, according to Erdogan, for a Syrian to be disqualified from participating in Turkey’s vision for postwar Syria is a “link” to any “terrorist group.” When Ankara employs a blanket classification of “terrorist” to Syria’s largest Kurdish political party that also happens to control up to one-third of Syrian territory, it is not difficult to discern the problem with this plan.

Certainly, the notion of Erdogan as both anti-ISIS crusader and Syria-stabilizer is hard to swallow. In particular, Turkey’s track record in northern Syria contradicts Ankara’s supposed commitment to an inclusive and stable Syria. Turkey’s January 2018 Operation Olive Branch, in which the Turkish Armed Forces and their Syrian Arab and Turkmen allies invaded the northwestern Kurdish canton of Afrin to oust the YPG, callously employed jihadis—including, as some have alleged, former members of ISIS—against the Kurdish and Yazidi populations. Despite that the YPG withdrew from Afrin before the Turks reached the city, some civilians were still subjected to religious interrogations under duress and were threatened with violent reprisals or beheading, while religious shrines and at least one statue dedicated to a mythological Kurdish hero were desecrated. Accusations of ethnic cleansing and cultural suppression abound. If the AKP is truly interested in differentiating between fighting a specific Kurdish militia rather than all Syrian Kurds, it has not built a convincing case.

It is apparent that Erdogan has not done his due diligence to protect vulnerable minorities who are caught in the crossfire of Turkish and U.S. foreign policy in Syria. It is likely that he will not go out of his way to do so in the future. Although the Trump administration is looking for a way out of Syria, it must see through Erdogan’s façade and recognize that Turkish intervention will not further U.S. objectives. It would do President Trump well to remember that Erdogan is no friend of the United States, but is merely using Washington as a means to further Turkish ends. Donald Trump is right to want the United States to leave Syria, but Turkey and Erdogan’s deceitful promises should not be trusted.