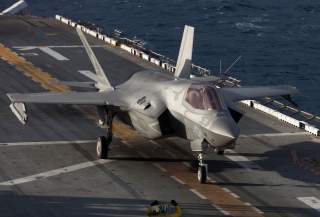 But let there be no doubt, the greatest challenge to the U.S. Navy when it comes to A2/AD weapons platforms comes from China.

The amount of threats it faces when it comes to ensuring the global commons remain open and free keep multiplying. Most of them come from what we have dubbed anti-access/area-denial strategies and weapons systems. Nations like China, Iran, Russia and in some respects North Korea and various non-state actors all want to raise the costs for Washington’s naval assets to operate near their coasts in the event of a crisis or war. And with the diffusion of cheaper weapons that only American and its allies held years ago-- such as various types of cruise and ballistic missiles, mines, subs, and other weapons-- Washington is working hard to find ways to negate such challenges.

But let there be no doubt, the greatest challenge to the U.S. Navy when it comes to A2/AD weapons platforms comes from China. Beijing has developed a sophisticated arsenal of weapons that would likely create lots of interesting dilemmas for the U.S. Navy in the event of a conflict or war. Below I present three of the most deadly that Washington needs to give careful consideration to--in no particular order, but all nerve wracking to say the very least: