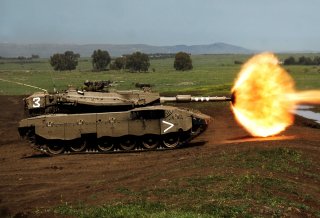 It is arguably impossible not to find remnants of past conflicts in the Middle East. There is also no denying that there is a lot of blood in the sand of the Holy Land as it has been the site of more wars than almost any place in the world. Therefore it shouldn't be all that surprising to see a destroyed tank or two from past conflicts—but recently some hikers in the Golan Heights found Israeli tanks full of equipment in a field.

The Jerusalem Post reported that a family of tourists hiking in the region near the Syrian border came across Israeli Defense Force Merkava Mk. IV tanks sitting in the field without any guard. The family, which posted a video online, was even able to enter the tanks to find various weapons and ammunition.

“This is an exceptional and serious malfunction that does not meet the standard expected by the IDF,” the IDF (Israel Defence Forces) Spokesperson Unit told the newspaper of record.

“The issue will be investigated immediately by the commanders and will be presented up to the level of the regional commander,” the IDF added. “Lessons will be learned and those responsible will be prosecuted and severely punished. After the incident, security around the vehicles was tightened and procedures were sharpened for all soldiers and commanders.”

The Golan Heights, also called the Golan Plateau or Hebrew Ramat Ha-Golan, is the hilly area that overlooks the upper Jordan River valley on the west. It was part of extreme southwestern Syria until 1967 when it was occupied by the IDF during the Six Day War. The Israeli military maintained its occupation until December 1981 when Israel unilaterally annexed the area outright.

Just as old abandoned cars may litter parts of the American southwest, the sight of an old tank isn't that unusual in Israel today. Many are scars on the terrain, a reminder of the past wars fought in the region.

This part of the Middle East also saw the first use of tanks in desert warfare during the British military campaign in what was then Palestine against the Ottoman Empire during the First World War.

It was in Gaza at the southwest corner of modern-day Israel where the British Army first employed tanks in the desert. Of the eight First World War-era tanks that were used in the campaign, three of the Mk I tanks—His Majesty's Landship (HMLS) Sir Archibald, HMLS War Baby, and HMLS Nutty—were destroyed by enemy artillery fire during the campaign. They would be far from the last tanks to meet a similar fate in the region.

As noted the tourists out hiking didn't come across a ruin from a century ago or one of the numerous Arab-Israeli Wars, but rather a group of fairly modern Merkava Mk. IV tanks. This is the latest version of the Merkava (Chariot) series of Main Battle Tanks of the IDF.

The Merkava was designed by General Israel Tal following the armored clashes of the Yom Kippur War and after the failure to purchase Chieftain tanks from the United Kingdom. Originally developed to take on Soviet tanks that were in service by Israel's Arab rivals, the tank was laid out in a rather unorthodox manner compared to contemporary Western and Soviet tanks, featuring a design more akin to some infantry fighting vehicles. Instead of having the engine at the rear, the engine was moved in front of the crew compartment, with the turret placed further back on the chassis.

The result was that the front armor could be more gradually sloped, and the crew could enter and exit the tank quickly from the rear. The downside of this design was that the engine could be more easily disabled. However, Israeli doctrine has prioritized the survivability of the crew in an engagement, and the layout of the tank allows the crew to escape through the rear hatch if necessary.

The Merkava I first entered service in 1978, and the tank saw its first major action in Operation Peace for Galilee in 1982, where it performed well in engagements with Syrian T-62 tanks. Nonetheless, several were lost in battle, and the subsequent Merkava II tank featured upgraded, spaced armor.  The 1990s saw the Merkava III with a critical upgrade to a 120-millimeter main gun, and finally, the latest Merkava IV has a more powerful engine and has recently been fitted with a sophisticated active-protection system for use against anti-tank missiles and rockets.

While it wouldn't be the ideal tank for every army, the Merkava has been the perfect main battle tank for the IDF. Now if they can make sure some tourists don't take one for a joyride the IDF should be in good shape for years to come.