Study This Picture: This Deadly Warship Is the Future of Russia's Navy 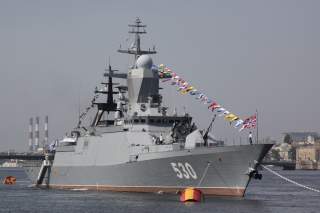 Russia’s Gromky corvette has undergone a rapid series of back-to-back tests over the past months, an indication that the Russian Navy is pushing to make it fully combat-ready by 2019.

Gromky is the seventh vessel to be constructed as part of Russia’s new Steregushchiy-class series, specially commissioned to serve in Russia’s Pacific Fleet. The Russian Navy plans to lay down a total of thirteen Steregushchiy-class corvettes through 2021, with the inaugural model launched in 2001.

On November 15, Gromky conducted a live artillery fire test in the Sea of Japan: "The advanced corvette ‘Gromky,’ that has to join the Pacific Fleet soon, has conducted live firing for the first time during sea trials. The structural testing of ship weapons was carried out with live firing in the Sea of Japan. An A-190 100-mm multipurpose shipborne automatic gun mount and AK-630 six-barreled automatic gun mounts were tested in various modes," according to spokesman of the Pacific Fleet Captain Nikolai Voskresensky.

Several weeks later, Gromky fire-tested the Kh-35 Uranus anti-ship missile system. According to a statement by the Russian Ministry of Defense: “In the course of state trials, the latest corvette ‘Gromky’ has fired the ‘Uran’ cruise missile against naval targets. The missile successfully destroyed a surface ship dummy at a distance of 40 km from the launch point.”

In late november, Gromky was tested in a large-scale anti-air exercise. According to Captain Voskresensky, Gromky successfully fended off eight aircraft including four Tu-22M3 strategic bombers, the MiG-31 interceptor, and the Su-35 fighter multi-purpose fighter jet. Details of the exercise remain unknown, aside from the aircraft unsuccessfully attempting various electronic countermeasures (ECM) to scramble Gromky’s onboard communications system.

Finally, Gromky accommodated several trial helicopter landings in Peter the Great Gulf on the coast of Primorsky Krai, Russia: “In the context of ongoing test, the [Gromky] corvette accomodated the landing of carrier aircraft. In Peter the Great Gulf, two Ka-27PL crews worked with the ship’s onboard aircraft support team to execute landings and takeoffs from the ship deck both in motion and at standstill,” Captain Voskresensky told Russian state news.  The Ka-27PL is a variant of the Kamov Ka-27 military helicopter, adapted for anti-submarine operations.

With this last wave of tests completed, the Amur-based manufacturer tells Russian news that Gromky will be formally accepted into the Russian Pacific Fleet in the final week of December: “Gromky” will be given from the Russian Navy to the Pacific Fleet on December 25-26. On that day, the flag will be raised as per the commander’s orders, signifying the ship’s transfer to the [Pacific] fleet.”

Gromky will be joining the similarly-equipped Sovershennyy corvette, added to the Pacific Fleet in the prior year. The fleet has grown to consist of a Slava-class cruiser flagship, four Udaloy-class destroyers, two corvettes including Gromky, and scores of submarines from the Kilo, Akula, Oscar, and recent Borei classes.

The Pacific Fleet, one of Russia’s four naval subdivisions (five counting the Caspian fleet), was particularly gutted in the aftermath of the Soviet collapse. Gromkiy’s rapid development and deployment is the latest addition in the Kremlin’s concerted effort to rebuild the Pacific fleet and thereby bolster its Naval presence in the East Asia region.