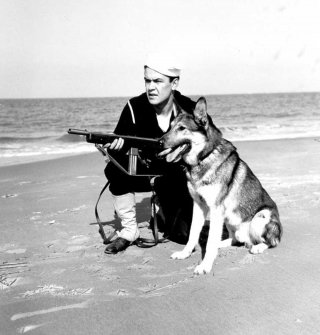 When the words submachine gun and World War Two are said, the iconic Thompson submachine gun invariably comes up. But there was another submachine gun used mainly by the United States, but by American allies as well that has nearly been forgotten: the M50 Reising submachine gun.

Eugene Reising, and assistant to the famed American weapon designer, initially designed the M50. His submachine gun design was in many ways superior to the Thompson. It was lighter, weighing a paltry seven pounds (the Thompson tipped the scales at around eleven pounds), and more accurate.

A compensator at the end of the barrel had several vents cut into it, which directed much of the hot gas to exit upwards and counter the typical upward “kick” inherent to automatic firing. Like the Thompson, some of the M50 variants also had cooling fins milled into the barrel to help dissipate heat.

It also cost considerably less than the Thompson, due in part to the M50’s extensive use of cheaper stamped steel parts, as opposed to its more famous cousin’s milled parts. It even used the same powerful .45 ACP handgun round.

The M50 was in some ways a higher-quality weapon. The parts that made up the receiver were more precise. But manufacturing precision hindered the design. The M50’s tight tolerances meant that the submachine gun was significantly more prone to jamming than the Thompson— a monumental drawback when considering the sand conditions that Marines in the Pacific Theatre fought under.

The M50 also suffered from a lack of parts standardization. Because some parts were less precisely manufactured, gunsmiths had to adjust part size by filing down pieces that didn’t quite fit. On the battlefield, Marines could not easily swap out damaged M50 parts as they could with other small arms like the M1 Garand or the Thompson—a crucial battlefield liability.

The M50 made its battlefield debut in 1942 when the Marines from the 1st Marine Division landed on the beaches at Guadalcanal. It was here that the M50’s reputation was soiled beyond repair.

One of the M50 variants came equipped with a folding wire stock, rather than the standard wooden stock. Although this made the weapon more compact, the wire stock’s locking mechanism was poorly designed, sometimes popping loose and closing inwards when the rifle was fired. The firing pin was also too fragile for battlefield conditions. It broke or malfunctioned with alarming frequency.

Feeding problems also occurred with dangerous frequency. The M50’s magazines lacked the robustness necessary for battlefield conditions and were easily bent out of shape. One solution was to modify the magazine from a double-stack to a single-stack design. While this modification addressed feeding issues, it reduced magazine capacity by 20 percent, from twenty rounds to a scanty eight.

After the war, the M50 and associated variants were offered on the civilian market, where the rifle was moderately successful compared to its military service. Despite superior accuracy and cheaper manufacturing cost, the M50 just couldn’t compete with the venerable Thompson.