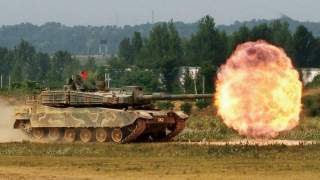 In November 2018, the Polish firm H. Cegielski – Poznań announced at a defense exposition in Kielce that it was partnering with the Korean firm Hyundai to offer the Polish Army a K2PL “Wolf” variant of its hi-tech Black Panther tank, according to Polish website Defense 24.

In fact there are two proposed options. First, Poland may develop its own tank with heavy South Korean input—similar to Turkey’s stalled Altay main battle tank project. Alternatively, and preferably from the Korean standpoint, Hyundai could manufacture K2PLs fitted with locally-built Polish components. Either way, the Polish firm would gradually take charge of a larger percentage of the project, while South Korea would in turn benefit from Polish support and expertise for its forthcoming K2B and notional XK3 tanks.

You can see the two companies’ promotional video here. It’s worth nothing that Poland already license-builds the AHS Krab, a spin-off of the South Korean K9 self-propelled howitzer.

Poland boasts by far the largest tank fleet of any NATO member state on continental soil—with 750 to one thousand main battle tanks, more than twice the number currently fielded by traditional major tank operators like the United Kingdom, Germany and France. Further afield, Turkey fields similar numbers, while the U.S. Army and Marine Corps have thousands in various states of readiness.

Poland is mostly situated on a flat plane with few natural obstacles, suiting the Slavic state’s legendary cavalry—and in World War II proved ideal for foreign tank invasions. At the outset of World War II in September 1939, Poland was overrun from both west and east by Nazi German and Soviet tanks, though her small armored force fought valiantly in the conflict.

Sadly, this was merely the fourth or fifth time in three centuries Russia and Germany collaborated to erase the Polish state from the map. This traumatic experience has left Poland amongst the NATO nations most alarmed by Russia’s recent aggressive actions in Ukraine, and most interested in fulfilling the widely-ignored requirement for NATO members to dedicate a minimum of 2 percent of GDP to defense spending.

The Poles also muster 247 Leopard 2A4 and 2A5 main battle tanks purchased from Germany with punchier guns and heavier armor. However, the older boxy-turret 2A4 model lacks modern defenses versus anti-tank missiles and proved vulnerable to ambushes when recently combat-deployed by Turkey in Syria. Poland is currently working on a unique Leopard 2PL upgrade for the 2A4s costing $2.7 billion zloty ($711 million).

The K2 Black Panther, by contrast, may be the most expensive tank on the market today at $8.5 million per unit, a distinction formally claimed by France’s Leclerc main battle tank. Like the Leclerc, the Black Panther weighs less than the Leopard 2 or U.S. M1 Abrams at 60 tons, but achieves similar levels of protection by decreasing the volume occupied by a fourth crew member (the loader) for an autoloader that can spit out ten rounds per minute. The vehicle’s fancy hydropneumatics suspension allows each individual roadwheel to be raised or lowered, allowing the tank to “lean,” “kneel” and “stand” as befits the tactical situation and traverse rough terrain handily.

The Black Panther also uniquely can fire the KSTAM parachute-retarded top-attack anti-tank missile. While gun-fired anti-tank missiles for long-range engagements are a standard feature of Russian tank designs, top-attack tank-fired missiles are extremely rare. Tank armor is dramatically weaker from the top, and KSTAM uses a kinetic explosively formed penetrator, which is less easily foiled then shaped-charges in most anti-tank missiles. The missile either employs both radar and infrared seekers for guidance, or can be manually guided by the crew—implying it may be capable of engaging targets out of line-of-sight.

The Black Panther is particularly distinguished by its abundant sensors and defensive systems, including a high-frequency radar, laser rangefinders and thermal cameras, and a computer system which can automatically lock the main gun onto targets, including helicopters and low-flying UAVs. Automation allows the main gun to be controlled by the tank commander in a pinch, or even, it is rumored, engage enemy forces without human direction thanks to an advanced Identify-Friend-or-Foe (IFF) system.

Additional capabilities are planned to enhance the K2. The KAPS hard-kill Active Protection System pairs a radar and thermal imager to detect incoming missiles at short range and shoot them down with rockets. Bricks non-explosive reactive armor are under development that pose less risk to nearby friendly forces and are more resilient versus tandem-charge anti-tank missiles.

Of course, the K2 would pose a serious fiscal challenge for a less wealthy state like Poland, though Hyundai is reportedly offering significant technology transfers in event of a deal. Though it’s hard to imagine the South Korean firm transferring enough to create a viable competitor, some observers argue that the Cegielski-Hyundai deal could revivify Poland’s military industries.

However, the Polish military will have to weigh the K2’s premium capabilities versus the cost efficiency of older, but still formidable Western tanks. The United States can sell its hefty M1 Abrams tanks at a competitive price, in part because Congress keeps ordering more despite the army insisting it has enough of them. Downsides of the M1 are its 70-ton weight and gas-guzzling turbine engine. Older Leopard 2 tanks may also be available at a good price, though Poland would likely then need to upgrade them. Polish Leopards and M1s would benefit from sharing common assets with NATO allies, unlike the K2. A rival Polish firm is alternately offering a more extensive upgrade to Poland’s hundreds of T-72s.

If Warsaw does opt for the pricey but high-performing Korean tank, development of the K2PL would occur between 2019 and 2022.