Supercavitating Torpedoes Could Revolutionize Naval Warfare (But It Won't Be Easy) 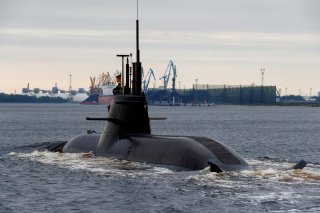 In the 2000s, a German firm developed a torpedo that was faster than high-speed trains. Here are the details.

Submarines are the ultimate underwater weapon—silent and hard to detect hundreds of feet under the ocean surface. Submarines' main armament, torpedoes, come in two sizes generally, 533-millimeter and 650-millimeter heavyweight torpedos. In general, they are tipped with high explosives.

Though there are a startlingly wide variety of propulsion systems used by torpedos, some, like the United States’ Mark 48 and Mark 46 torpedos, use a piston engine and specially formulated propellant. They are faster than the majority of surface ships and submarines, but cannot travel faster than 50 miles per hour.

But there is a different design—that is orders of magnitude faster.

Supercavitating torpedos on the other hand travel extremely fast—hundreds of kilometers an hour. Torpedos of all types are slowed down by drag caused by friction with water. One way to overcome this drag is with bubbles.

Control surfaces, generally fins, pierce the bubble and maintain contact with the water, allowing the torpedo to steer.

With conventional torpedos, steering is as simple as adjusting fins. But with supercavitating torpedos, not only do fins need to be shifted, but the bubble sheath that surrounds the torpedo must also be maintained.

Turning distorts the bubble surrounding the torpedo, and can cause the torpedo body to come into contact with the ocean. To compensate for this, more of the bubble-forming gas needs to be shifted to the side of the torpedo that is facing the turn. This is not easy.

In the early 2000s, a Germany company worked in tandem with the German Navy (Deutsche Marine) to develop the Superkavitierender Unterwasserlaufkörper, or Supercavitating Underwater body.

The German torpedo had a unique cone nose that projected forward of the torpedo body. The torpedo’s velocity was allegedly 400 kilometers per hour, or about 250 miles per hour. The Superkavitierender Unterwasserlaufkörper can also control for depth by injecting more gas into the bubble to offset compression that happens as depth increases.

Several other countries produces supercavitating torpedos as well. The Soviet Union made one in the 1970s, and Iran claims to have developed a torpedo that nothing in the ocean can avoid. The United States may also have developed a similar torpedo, but details are scant.

Supercavitation could revolutionize naval warfare—if the technology can be mastered. Simply going straight ahead is simple enough—maneuvering is the challenge. If reliable—and steerable—supercavitating torpedos ever enter serial production, they will dominate the seas.