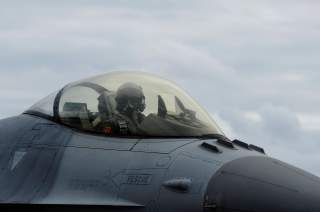 It also appears that Moore’s Law is coming to haunt the Western defense industry, as the capacity of the integrated circuit doubles every two years, thus making manufacturing cheaper and easier for other countries, like Taiwan.

Though Taiwan’s state-run National Chung-Shan Institute of Science and Technology (NCSIST) has built large road-mobile and fixed land-based passive electronically scanned (PESA) radars for the military, this appears to be the first time a Taiwan entity has been able to produce an AESA with GaN.

NCSIST has been working on an airborne AESA for the air force’s trainer aircraft program, but now Tron is challenging NCSIST on every radar and electronic warfare requirement for the Taiwan military.

Tron, established early this year, will not only serve as a competitor to NCSIST but also to Western companies looking to provide equipment for these projects. Tron also plans to enter international markets in both the civilian and defense sector.

The major difference between NCSIST’s AESA and PESA radars is that Tron’s solutions are focused on element-level digital AESA in ultra-thin form.

“Element-level digital AESA allows our AESA to achieve radar/electronic warfare/communication simultaneously, and is software-defined, which means its functions can be quickly altered depending on situational needs.”

He said that NCSIST cannot achieve this capability and still suffers from SWaP [size, weight, and power] issues. “We are currently helping the Taiwan army, navy and air force evaluate and develop their systems.”

In August, the company provided a demonstration of a low-voltage pulse-mode array to the Taiwan military and is in the process of producing a full-scale AESA with MIL-STD 810G. An AiP [antenna-in-package] transmit/receive (T/R) module is already production ready and a GaN/CMOS T/R module using ceramic composite substrate material is now under development.

“Depending on power density [average heat generation/AESA aperture size], the most demanding [requirement] is the air force fire-control AESA; for this one, the heat is an issue due to the small size and high-power density, but we are working hard on it with help from external advisors and it shall be solved next year,” he said. “The rest of the AESAs are not as demanding, including the navy’s Aegis systems or other civilian systems; in these cases, we do not have heat issues.”

Due to Taiwan’s unique computer industry, Tron can use “domestic semiconductor foundries to eliminate export control.”

The birth of companies like Tron was made possible due to an enhanced defense industry self-sufficiency policy under President Tsai Ing-wen. When her administration took power in 2016, it pushed for enhanced national defense industry independence that protects Taiwan from U.S. foreign policy mood swings over relations with China.

The Act also encourages technology transfers and cooperation between academia and the private sector. It also requires a fixed ratio of Tron’s revenue to be endowed to NCTU to help facilitate future research.