Taiwan Defiant in the Face of Escalating Chinese War Drills 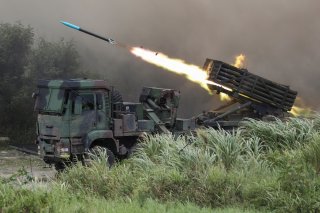 China announced a new slate of drills on Monday amid the continued fallout from House Speaker Nancy Pelosi’s visit to Taipei.

China's Eastern Theater Command said on Monday that it will continue its military exercises and training activities near the self-governing island of Taiwan, according to Reuters. The Chinese military said its upcoming drills in the region will focus on anti-submarine warfare (ASW) and maritime assault operations. The announcement drew condemnation and defiance from Taipei. "In the face of military intimidation created by China, Taiwan will not be afraid nor back down, and will more firmly defend its sovereignty, national security, and free and democratic way of life," read a statement issued by Taiwan’s foreign ministry.

The People’s Liberation Army (PLA) announcement comes on the heels of a massive series of Chinese military drills on Saturday that Taiwanese authorities described as a “possible simulated attack” on the island. “Multiple PLA craft were detected around the Taiwan Strait, some have crossed the median line,” tweeted Taiwan’s Defense Ministry, adding that it fired flares on Friday night to warn off seven Chinese drones and unidentified aircraft.

"As long as the Taiwan question is not solved, drills like these will not stop," military expert Song Zhongping told Chinese media outlet Global Times.

Over ten Chinese destroyers and frigates conducted “joint blockade operations” in waters near Taiwan, according to Chinese state news publication Xinhua. The Chinese vessels were supported by several types of military aircraft, including bombers, reconnaissance planes, and early warning aircraft. Concentrated in six distinct zones surrounding Taiwan, the recent exercises are intended to practice what some Chinese and Western experts say would amount to a full-scale encirclement of the island. "Connect the six areas in a line, like a noose, with the knot of the noose right in the southwest direction," PLA National Defense University professor Meng Xiangqing told Chinese state news, according to CNN. "This is an unprecedented encirclement of Taiwan Island."

The spate of recent Chinese military activity around Taiwan comes shortly on the heels of Pelosi’s controversial visit to the island. In an apparent program of retaliation against Washington, China has canceled talks with American military officials and scaled back cooperation with the United States in areas including trade and climate change. Beijing announced on Friday that it was levying sanctions on Pelosi over her “gross interference in China’s internal affairs.”

White House National Security Council coordinator for strategic communications John Kirby condemned China’s punitive measures as “irresponsible” on Friday. "I'm sure you will see the announcements by China today that they are closing down engagement with the United States on a range of critical issues to include climate change … we believe that this is fundamentally irresponsible," he said.  "China is not just punishing the United States with this act, with these actions, but they're actually punishing the whole world."