Taiwan Just said No to the F-35 Stealth Fighter. What Now? 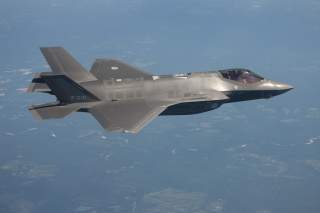 Amidst the fallout from last week’s “midterm” elections for city and county-level officials last week, news emerged that Taiwan will stop asking the United States to sell it the F-35. The decision could not have been easy for the Tsai administration, especially because the United States has long refused to sell the F-35 to Taiwan even as it readily sells it to Japan and South Korea. Nevertheless, it was the right move. The F-35’s costs vastly outweigh its benefits. It is provocative, expensive and—most important—ill suited to Taiwan’s defensive needs.

Scrapping the F-35 was an important first step. Still, the Tsai administration can and should do more to challenge longstanding orthodoxies about the best way to deter China.

Taiwan has long organized its defenses around a small inventory of expensive, high-end weapons. The Tsai administration has accelerated such efforts. Taiwan is now actively trying to build a tiny fleet of diesel submarines and seeking to buy ever more M1A2 main battle tanks. Despite a rhetorical commitment to asymmetry, Taiwan seems largely set on deterring Chinese aggression by threatening to go toe-to-toe with the People’s Liberation Army (PLA) in the event of war.

We suggest a more radical approach.

As we learned while conducting interviews in Taipei this past January, Taiwan’s defense officials think Taiwan should use quality to offset quantity. Such strategies can undoubtedly work under the right conditions. It is, after all, a guiding principle behind U.S. security policy.

Unfortunately, the conditions are far from right for Taiwan due to what we are calling its deterrence trilemma. That is, to deter Chinese aggression, Taiwan has to build a force that can both counter “grey zone” provocations and make invasion unacceptably costly without dramatically increasing the defense budget.

These goals are in tension with one another. To win in the grey zone, Taiwan needs high-visibility platforms like surface ships and fighter jets to project strength and resolve. But to deter an invasion, Taiwan needs large numbers of survivable and concealable weapons that can withstand a punishing first strike. If Taiwan had an unlimited defense budget, then it could simply buy large numbers of high performance weapons.

Yet political realities mean Taiwan’s defense budget is severely constrained relative to the threat. Therefore, Taiwan’s longstanding approach to deterrence is risky. DPP and KMT consensus notwithstanding, depending on a small inventory of expensive platforms leaves Taiwan vulnerable to a Chinese first strike. The PLA has always possessed a quantitative advantage over Taiwan. The PLA has—or likely soon will have—a clear-cut qualitative advantage as well. If it chooses to invade, then it will use its ballistic and precision missiles; covert and special operations forces; and attack aircraft to destroy the few submarines, surface ships, fighter jets and tanks that Taiwan can afford. Even if the United States and its allies intervene—which is far from guaranteed—China’s anti-access weapons will likely buy the PLA time to neutralize the core platforms around which Taiwan organizes its defense strategy.

A number of U.S. experts think Taiwan must dramatically change course. They suggest that Taiwan embrace a genuinely asymmetric approach by abandoning its existing inventory of “exquisite” weapons in favor of far larger stockpiles of anti-ship cruise missiles, drones and mines. Taiwan’s unique situation means that quantity has a quality all its own.

We join this growing chorus. Earlier this month, we released a monograph that we wrote with a team of defense experts and retired U.S. military officers at George Mason University. Building on policy work emphasizing asymmetric deterrence, we suggest that Taiwan consider adopting an elastic denial-in-depth posture.

Our recommended approach has three core pillars: accept risk in the grey zone; prioritize the invasion threat; and prepare for territorial defense.

Taiwan should accept risk in the grey zone. Systematic violations of Taiwan’s airspace and waters are problematic. Nevertheless, budget realities necessitate tradeoffs. We think it is better off focusing on the existential threat: invasion.

The grey zone threat is also overstated. China need not prevail in the grey zone to invade. In fact, China might operate in the grey zone precisely because it wants to avoid escalation. Violating Taiwan’s airspace and waters lets the CCP look like it is doing something without running the risks associated with invasion. Since Taiwan is a core interest for the current regime, it will likely escalate if it finds the door to the grey zone closed. And if Taiwan were to give up in response to grey zone challenges along, then it has far more profound sources of vulnerability than any military strategy can possible resolve.

Accepting risk does not mean that Taiwan should completely give up in the grey zone. It still must challenge violations of its waters and airspace. However, it does not need cutting edge aircraft or Aegis-like surface ships to perform grey zone missions. Its existing air and naval platforms are adequate. An F-16 can intercept a spy plane as well as an F-35. And unlike an F-35, the F-16 will actually work when Taiwan needs it most.

Postponing costly programs such as the Indigenously-produced Diesel Submarine (IDS)—and divesting entirely of capabilities like its fleet of amphibious assault ships—will free resources so as to allow Taiwan’s military to focus on the real threat: invasion.

Taiwan should prepare for an invasion scenario by shifting from a defensive to a denial mindset. The difference is far from rhetorical. Defense implies fighting for control. Denial means making it costly for the other side to establish control, even if it means relinquishing control.

Taiwan must abandon its current approach, which emphasizes fighting decisive battles in the littorals and on the beaches. It should instead prepare to create a No Man’s Land running from the Strait to Taipei.

The best way to accomplish this goal is to invest in large numbers of relatively cheap anti-access weapons that will degrade an invasion force as it tries to cross the Strait. Examples include anti-ship cruise missiles, anti-air missiles, missile boats, semi-submersibles and mini-submarines, suicide drones, Javelin anti-tank missiles and thousands upon thousands of naval mines and delivery systems. Given its advanced and technology-savvy industrial base, Taiwan can also consider investing in a limited range of futuristic capabilities, such as 3D printing.

Taiwan should also train its forces to fight elastically. Instead of seeking a decisive battle, units should impose costs, retreat, regroup and impose more costs. They should train to fight this way ad infinitum. In our view, Taiwan’s soldiers, sailors, Marines and airmen should never die to defend a piece of ground. They should instead kill to punish the aggressor for trying to take it.

Our last recommendation is also our most controversial. We think Taiwan can bolster the credibility of its conventional defenses by threatening to wage a prolonged insurgency against an invasion force. After all, an invader will seek to establish political control over the island. A successful amphibious assault—which is by no means easy in its own right—is likely necessary, but not sufficient, to realize this end.

Taiwan can thus raise the prospective costs of invading by making it far harder to establish and exercise political control.

There are three reasons for augmenting conventional deterrence measures with insurgency. First, the PLA has spent decades modernizing and learning how to fight wars under “informationalized” conditions. As a result, it likely shares the same vulnerabilities to “low end” warfare that inevitably befall any military that chooses to specializes in “high end” combat. Second, insurgencies take time to suppress and tend to provoke brutal over-reactions by occupation forces. These factors increase both the possibility of external intervention. Third, an insurgency will put the PLA on the horns of a dilemma. Counterinsurgency operations require lots of manpower. China can deploy tens of thousands of its People’s Armed Police Force (PAPF) personnel, but only by accepting tremendous risk in its already restive provinces. Alternatively, it can divert tens of thousands of additional PLA personnel from active combat operations.

Taiwan must be deliberate about planning for territorial defense. Insurgencies are rarely spontaneous. Nor are civilians equipped to ambush and attack invasion and occupation forces. Instead, Taiwan should consider transforming its massive 2.5 million-strong Reserve Command into a Territorial Defense Force (TDF). TDF training can focus exclusively on waging guerrilla, including demolitions, ambush operations and strategic communications. TDF personnel can be assigned to independent cells based near their homes. To complicate preemption by the PLA, each cell should have its own armory and satellite communications assets, which it should be prepared to divide into multiple caches at the first sign of attack.

The worst option except for all the others

Readers might disagree with our recommendations. One common criticism is that our proposals are too radical. Taiwan’s voters will never support such an aggressive posture and would be unwilling to wage a guerrilla war against the PLA. We think such critiques overlook important opinion and identity shifts, particularly those that are taking root among Taiwan’s youth. Our call to form a TDF could indeed consolidate the formation of these identities, thereby strengthening social resilience and resolve.