Tanks, Ships, and Assault Rifles: India Still Buys Most of its Weapons from Russia 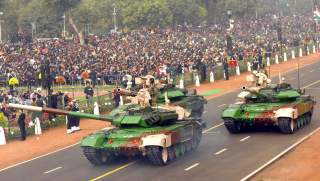