Teaming Up: Air Force Pilots Will Fight Alongside an Arsenal Drones 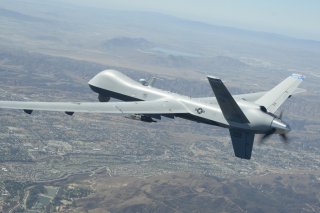 "The term that's really been latched on to by a lot of folks is this idea of a 'loyal wingman,'" Clark explained, referring to what would be a smaller unmanned aircraft that flies in cooperation with a piloted aircraft.

"As we went through and did our U.S. operations analysis, we didn't see the loyal wingman constructs really making the substantive mission impact against the peer or near-peer adversaries the way that you would have expected off the cuff," Clark said.

Rather, "you started to have a distributed team and that distributed team is operating with each with their own unique roles." He added that "we really spent a lot of time then exploring, 'all right, what does this distributed concept look like and how would we go explore that?’”

"As an example, you know, one of the early concepts that we explored was actually the team member being a satellite as opposed to it being another aircraft," he said. Clark continued: "We actually started looking at, you know, how could a low earth orbit constellation of remote sensors be made available to provide that information to, say, a Next Generation Air Dominance or a B-21 that was progressing on its mission."

Though an ‘expendable crewman’-type aircraft could certainly save human lives by taking on high-risk mission sets, dollars and cents quickly add up.

“In the context of any of these fights, attrition has got to be a part of the calculus,” Mr. Clark explained. “You can demonstrate any mission concept in an operational analysis venue and show that, hey, it works once. Can you make it work repeatedly over 30 days when you start to accumulate the losses of a campaign?”

Clark added that “the cost proposition that you're looking at and if you're looking at the cost of losing a vehicle, it's, let's say $10 million and your attrition rates' north of 80 percent, those numbers add up very quickly. And then that remaining 20 percent that you didn't atrit, what's the sustainment or logistics trail that comes with them to reconstitute them, to then go reuse them?”

The solution? A distributed team of unmanned aircraft, each with a slightly different set of assets and attributes, that together, radically multiply the abilities of a piloted fighter aircraft— be it an F-35, an F-22, or the upcoming Next Generation Air Dominance fighter.