Technological Testbed: Next Generation Stealth Fighter Tech to Be Trialed in the F-22 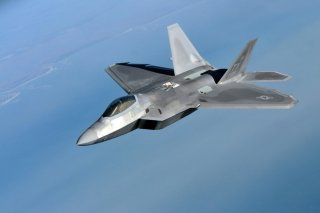 The venerable F-22 Raptor, one of the world’s top stealth fighters, will be used as a testing ground for new technology that will also go into the Next Generation Air Dominance (NGAD) fighter. The NGAD will be the world’s first sixth-generation fighter and is expected to be extremely stealthy.

According to The Drive, information gleaned from the Pentagon's 2023 budget request sheds a bit of light on what is otherwise a top-secret system. According to the article, “the F-22 Advanced Technology Development (ATD) program is conducted using a rapid acquisition construct leveraging commercial best practices. This allows the F-22 Raptor enterprise to develop, test, and field software/hardware from multiple programs (product lines) using a scheduled cadence for capabilities as they mature.”

The article also noted that “the F-22 program attempts to maximize efficiency by utilizing technology transfer both to the Next Generation Air Dominance (NGAD) portfolio, and from the NGAD portfolio based on emerging threats, AF priorities, and development pipeline capacity. Incorporating NGAD developed technologies will include developing, integrating, and testing capabilities on the F-22 weapon system.”

While the F-22 Raptor is the world’s stealthiest fighter, there are less than 200 of the jets in existence. The Pentagon made this decision due to high program costs, the end of the Cold War and the absence of a peer rival, and the conflicts in Iraq and Afghanistan, for which there was no need for a high-end sixth-generation stealth fighter.

“This includes developing and maturing advanced Infrared Search & Track (IRST) sensor capabilities to provide the F-22 with an asymmetric sensing advantage against potential adversaries while continuing to deliver on its unmatched maneuverability.” It should also be noted that research on an improved ISRT sensor for the F-22 would have clear applicability to the Next Generation Air Dominance fighter.

Interestingly, there appears to be significant interest in increasing the F-22’s range through the use of improved underwing drop tanks. The F-22’s range has been one of the platform’s most significant drawbacks, and while there are underwing drop tanks available for the F-22, improved, lower radar cross-section tanks would be a boon for the program.