Teenagers in Danger: Flavored Vape Ban May Have Unintended Consequences 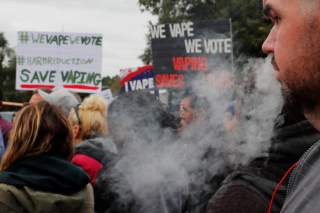 As of December 2019, eight states have acted to ban the sale of flavored e-cigarettes. Other states are contemplating bans in 2020.

I have pointed out here and here why banning flavored vaping products will deny adult tobacco smokers a proven means of quitting harmful tobacco smoking. In fact, nicotine e-cigarettes—of which more than 90 percent of adult tobacco quitters prefer the flavored kind—are twice as effective as nicotine gum or patches in helping smokers stop. We recently learned from the Centers for Disease Control and Prevention that virtually every case of EVALI (e-cigarette or vaping product-use associated lung injury) is due to bootleg THC vaping cartridges containing vitamin E acetate.

The states of Washington and Colorado, where recreational cannabis is legal, banned the use of vitamin E acetate in the manufacture of any THC vaping cartridges by state-based companies in reaction to the CDC report.

It has been illegal to sell e-cigarettes to persons under age 18 since 2016. The reason lawmakers are targeting flavored vaping products is because underage e-cigarette users prefer the flavored variety. But, as mentioned above, so do adults trying to quit tobacco.

Now comes a new study published in the December issue of the peer-reviewed journal Addictive Behaviors Reports that found 80 percent of adolescents aged 13-17 who were able to obtain JUUL brand e-cigarettes got them from “at least one social source (e.g. ‘someone bought for me, someone offered me’) in the past 30 days. The rest were able to buy them, usually at convenience stores or gas stations.

Keep in mind, JUUL brand e-cigarettes, the most popular brand on the market, are legally produced and do not contain vitamin E or THC (which is federally prohibited).

The many arguments against a panic-driven ban on flavored e-cigarettes resonated with US Senator Ron Johnson (R-Wisconsin), who sent a letter, co-signed by several other senators, urging President Trump against going through with his plans to implement a federal ban on flavored vaping products. The letter appeared to help. The President backed off on his plan in late November.

In announcing the change in plans, President Trump said, “If you don’t give it [flavored vaping cartridges] to them, it’s going to come here illegally.” He's correct.

There is already evidence that the Mexican drug cartels are getting into the vaping cartridge business. Now with this new evidence of the ease with which teens are able get safer and legally produced e-cigarettes through “social sources,” it is easy to see how dangerous, tainted, products smuggled along the cartel routes will quickly fill the void created by a flavored vaping ban.

State lawmakers should restrain the impulse to “do something” in reaction to a largely media-driven panic that ignores the abundant evidence.

This article by Dr. Jeffrey A. Singer first appeared at CATO on December 13, 2019.