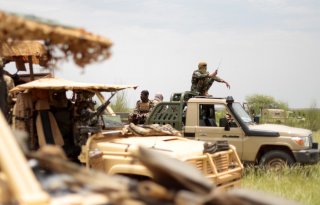 An attack on Wednesday near the village of Bodio in central Mali’s Mopti region led by Islamist extremist groups claimed the lives of at least nine soldiers and injured eleven others, according to AFP. The Malian armed forces claimed that they had been subjected to a “complex IED (Improvised Explosive Device) attack” by insurgents, but had driven them off with heavy losses. The most likely culprit for the attack is the “Group to Support Islam and Muslims” (GSIM), Al Qaeda’s official affiliate branch in West Africa.

Owing to its instability, poverty, and remote location in the Sahel, Mali has been a hotbed of extremism over the past decade. In 2011, following the ouster and execution of Libyan dictator Muammar el-Gaddafi, an arsenal of Libyan weapons flowed south into Mali, where they were instrumental in a 2012 attempt by ethnic Tuaregs in northern Mali to secede from the south. The state they created, Azawad, soon fell under the sway of Islamist extremist groups including Ansar Dine and the Movement for Oneness and Jihad in West Africa (MOJWA), two groups that later combined to form GSIM.

Following a successful military intervention by the French, the Malian government retook the north, but fighting spread to other regional countries in the Sahel, including Burkina Faso and Niger. French troops remain in the Sahel, although President Emmanuel Macron has made efforts to reduce the French troop level from 5,100, the country’s current deployment, to 2,500 to 3,000.

The security situation in Mali has deteriorated since the onset of the coronavirus pandemic. In August 2020 and May 2021, two successive coups overthrew two iterations of Mali’s government—first the civilian rule of Ibrahim Boubacar Keita, and then the transitional coalition government led by former defense minister Bah Ndaw—and propelled Assimi Goïta, a colonel in Mali’s armed forces, to the presidency.

During this period, armed attacks by Islamist insurgents against Malian and French troops and UN peacekeepers have increased—mostly in the country’s central region, which has emerged as one of the most violent places in the Sahel. The use of improvised explosive devices, or IEDs, along roadways has become a particularly common tactic.

In addition to the increased violence, Goïta has had to confront his country’s suspension from the African Union and the Economic Community of West African States (ECOWAS), as well as international sanctions from both organizations.