This Tesla Model X Comes With Some Unusual Accessories—Machine Guns 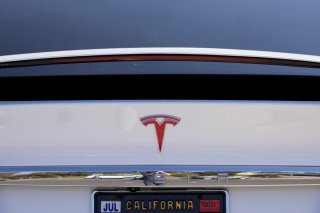 James Bond doesn't drive a Tesla, at least not yet. And while the electric vehicles (EVs) haven't appeared in the popular Fast & Furious series either, there is now a modified Tesla Model X that would be at home in either movie franchise. The folks at YouTube channel FullMag added a super cool accessory to the car, and it is one that would be ideal for a well-dressed spy or even some street-racers turned vehicular hijackers.

Designed specifically for Black Rifle Coffee Company (BRCC), a boutique firm that was founded by U.S. military veterans in 2014, the Tesla Model X received dual belt-fed Mini-gun-style machine guns that could be deployed out of the falcon-wing doors.

As this was designed for BRCC, and likely will be making the rounds at trade shows and other public events, the purpose of the build was very much to make coffee and not to go to war. As such, the EV also received a full-service coffee bar, complete with a full Marzocco GS3 espresso machine, and was fitted with room for canned coffee in the rear hatch.

Still, the most head-turning feature of this EV was the deployable machine guns. The crew at FullMag, which has a history of adding some firepower to automobiles as well as testing high-powered weapons, collaborated with Unplugged Performance to install the body kit, which gave the auto a militaristic makeover. The auto even received a subtle olive drab digital camouflage-themed paint job. The build teams hardwired and mounted the electronically deployed machine gun system to the car's onboard electronics. According to Interesting Engineering that meant that the Model X's battery pack was able to power the whole machine gun system.

It isn't clear what this build cost, but the base price of the 2022 Tesla Model X, a mid-size luxury crossover, is $104,990. It has a range of around 350 miles from its battery, but deploying and firing the machine guns would certainly reduce that range. The full Marzocco GS3 espresso machine was not hardwired to the Tesla powertrain and instead runs off a Yeti Goal Zero power station that was placed in the lower truck of the crossover.

While such a vehicle wouldn't be street legal of course, the YouTubers have long done these unique builds.

The FullMag YouTube channel was launched in 2007 and currently has more than 2.71 million subscribers. Its videos consist of true "guy stuff" including driving a Tesla at 132mph with night vision goggles (NVGs) and testing whether Rambo's exploding arrows would work in real life.

After adding the dual machine gun Tesla, the guys followed up with a build that includes a Plaid Tesla Model SR762 equipped with an M134 Minigun! In that case, it seemed that the Minigun was purely aesthetic but it would be enough to likely convince other drivers to give you the right of way!