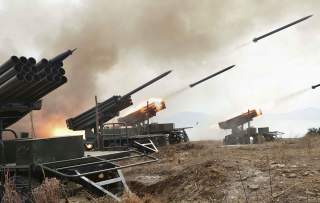 More than 30 million people including hundreds of thousands of foreigners live within range of North Korea's 13,000 artillery pieces.

Artillery barrages in the opening hours of a full-scale war on the Korean peninsula could kill or injure 250,000 people, the U.S. Defense Department estimated.

But evacuating the vulnerable population could prove impossible, the California think-tank RAND explained in a January 2019 report.

The metropolitan area surrounding Seoul, which lies just 25 miles south of the demilitarized zone separating the two Koreas, alone is home to 25 million people including 1.5 million foreign nationals. 150,000 of the foreigners are Americans. Another million are Chinese.

Prior to or during a war, all could be subject to a "non-combatant evacuation operation," or NEO.

By comparison, the evacuation of civilians from Saigon in 1975 -- "one of the larger-scale evacuations to occur in the past 50 years," according to RAND -- managed to move just 7,000 people in two days, many of them by helicopter. The rotorcraft directly delivered the evacuees to U.S. Navy ships sailing off the Vietnamese coast.

An evacuation would play out differently in South Korea. And it would be much riskier.

First, authorities would have to locate Americans, an undertaking RAND compared to "finding a needle in a haystack." "Consider the resources and force requirement of searching and locating just the U.S. citizens alone inside the densely populated [Seoul Metropolitan Area."

If and when authorities located them, "civilians would primarily be evacuated out of Seoul -- the most densely populated area of the [Republic of Korea] -- generally moving south along the roads toward exit points (air and sea) in Pyeongtaek, Gunsanhang, Daejon, Daegu and the southeastern port city of Busan."

RAND estimated that getting all of those people out of South Korea via the exit points could require 4,411 sorties by U.S. Army CH-47 helicopters and 975 flights by U.S. Air Force C-17 cargo planes.

Considering that the Army possesses just 483 CH-47s and the Air Force has only 222 C-17s -- and that only a fraction of the overall fleets would be available on short notice for an evacuation -- the operation to spirit away 150,000 Americans could take weeks.

But a surprise attack by North Korea could threaten hundreds of thousands of people in mere minutes.

RAND gamed out North Korean artillery strikes on the Cheorwon Valley that extends north from Seoul. 1,000 artillery systems belonging to the North Korean army's V Corps could fire 25,000 rounds during a 10-minute barrage, endangering as many as 180,000 people.

Other governments could organize evacuations in parallel with the American effort ... potentially to mixed results.

"Other countries that are likely to participate in a NEO, including Japan and China, have vastly different capabilities and resources at their disposal to evacuate their citizens out of harm’s way," the report continues.

Furthermore, China might also press the DPRK to refrain from targeting civilians, especially those seeking to exit a war zone."

American certainly can't safeguard Seoul's civilians all on its own. "Cooperation and preparation between the United States, the ROK, Japan, China and other allies is required to make an NEO on this scale feasible," the RAND report advises.

But feasible is not the same thing as likely. North Korea probably can level towns and cities faster than America and its allies can clear them of their residents.