There is Now a Shortage of Christmas Trees, Experts Warn 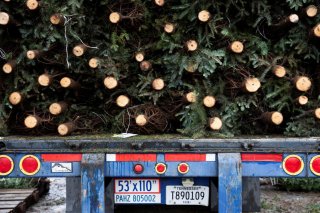 At the start of the global novel coronavirus pandemic, there were shortages of toilet paper, cleaning products and hand wipes, and of course frozen pizza. This year has seen the supply chain issue get worse, impacting the availability of firearms ammunition. Meanwhile, the global microprocessor chip shortage has affected the supply of everything from video game consoles to automobiles.

Various industry and retail analysts have warned for months that some products won't arrive in time for the holidays. However, it may not just be the lack of gifts under the tree this year. In some cases, there may not be a tree. Across the country, there are growing fears that there aren't enough Christmas trees this year, due to a number of factors.

Extreme weather in the Pacific Northwest, along with supply chain bottlenecks have left Christmas tree lots across the United States scrambling this holiday season. Among the most popular Christmas trees are Douglas and Noble firs, which come from the Northwest.

Persistent drought, rising temperatures, and of course the wildfires that ravaged the region last summer have resulted in fewer trees on the market.

"This last season, we had a lot of wildfires, a lot of heat waves, and a lot of drought in the Pacific Northwest," Scott Albretsen, tree specialist for Valley View Christmas Trees in Oregon, told KTAR News earlier this week. "And that's caused a lot of damage to the farms up there. A lot of the mature trees were damaged from it, and a lot of the seedlings that were just planted were completely lost."

It isn't just Oregon and the Pacific Northwest that has been impacted by weather. A similar story is being told in North Carolina and even parts of Canada. Supplies just aren't where they should be.

Climate change has been dubbed this year's Grinch. That is why Oregon Democratic Senator Ron Wyden has met with local tree producers and has already sought to introduce new legislation to help protect tree growers in the Beaver State in times of disaster.

"People don't understand what is happening with respect to heat and drought," Wyden told reporters.

While climate change could be a factor for real trees, the ongoing supply chain issues are also impacting artificial trees.

"The demand this year is going to be extremely strong and so I think from a consumer perspective people definitely shouldn't wait," Chris Butler, CEO of National Tree Company, a top importer and wholesaler of artificial Christmas trees and holiday decorations, told CNBC.com last month.

Not everyone believes the problem to be quite so bad.

There had been previous reports of Christmas tree shortages in recent years and not just during the first pandemic Christmas in 2020. There were reports of shortages in 2017, 2018, and 2019, which is why Doug Hundley, spokesperson for the National Christmas Tree Association (NCTA) said consumers should not buy into the hype just yet.

"The shortage talk has been going on for the fifth year now," Hundley told NewsNationNow. "And those of us at the NCTA have tried to put water on that fire, but it just doesn't work."

Hundley added that a factor was from the years 1995 to 2015, there was actually an oversupply of trees.

"People were very accustomed to seeing hundreds of trees on tree lots all the way through Christmas Eve and even the week of Christmas. That's not a good sign for us of course," Hundley explained. "It wasn’t that demand was down, we had just planted a lot of trees."

However, this year the safe money may be to buy early and not risk having to settle for a "Charlie Brown Christmas Tree" or worse, not having a tree at all.