There Is a "Private" Air Force in Texas (And the U.S. Military Loves It) 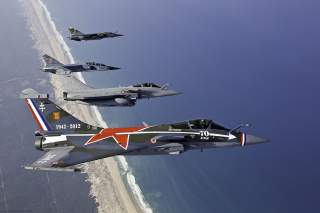 "Textron retrofitted around 45 of the F.1s with modern avionics systems such as digital radio-frequency memory-jamming capabilities and upgraded radars," according to Jane's. "ATAC plans to use the Mirages for the U.S. Air Force adversary-air requirement, which requires almost 150 aircraft to fulfill the service's red-air training needs."