These Americans Were Receiving Pensions Long Before Social Security 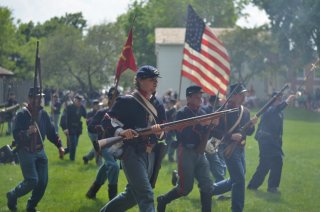 Even before President Franklin D. Roosevelt signed the Social Security Act into law in 1935, another form of social security was already in place. That was the national pension program, and the first of its kind was passed in early 1776 before there was even a United States of America. The pension program even was created prior to the signing of the Declaration of Independence.

This was followed by another pension, which was passed by a resolution of the Continental Congress on May 15, 1778. It was meant to encourage officers and enlisted men to serve for the duration of the conflict, allowing half-pay for all officers and a set gratuity of $80 to all enlisted men who remained in service to the end of the war. On August 24, 1780, the Continental Congress passed the first act, offering pensions to widows and orphans of Revolutionary War soldiers.

During the war, such pensions were used to encourage enlistment and acceptance of commissions and to prevent desertion and resignation. Following the war, these pensions then became a form of reward for services rendered. States, as well as the federal government, offered and awarded pensions based on participation in the Revolutionary War. However, the Revolutionary War Pension and Bounty-Land Warrant Application Files in the National Archives (Microfilm Publication M804) contain only the records of pensions granted or paid by the U.S. federal government.

In fact, many who had been promised a pension didn't receive it. Revolutionary War veterans actually made up a very small proportion of the electorate, so they were never able to organize a powerful lobby. It actually took the support of veteran presidents, including James Monroe and Andrew Jackson, that Congress finally passed pension legislation for indigent veterans in 1818 and for service pensions for all veterans in 1832.

Throughout America's so-called "antebellum period," various other pensions of limited types were paid to veterans of America's foreign wars. Yet, it was the conflict that almost tore the country apart the created the first truly lasting program.

The Civil War Pension program, which began shortly after the start of the war, was meant to provide benefits linked to disabilities incurred as "a direct consequence" of military duties. Additionally, widows and orphans could receive pensions equal in amount to that which would have been payable to their deceased soldier if he had been disabled.

In 1906, old-age was then made a qualification for the benefits, and by 1910, Civil War veterans, and sometimes spouses or children who survived them, enjoyed a program of disability, survivor, and old-age benefits that were in many ways similar to the later Social Security program. However, while ninety percent of the remaining Civil War veterans received benefits, they accounted for barely 0.6 percent of the total population.

Civil War pensions were such an asset that it actually attracted young wives to elderly veterans whose pensions they could inherit as the widow the veteran. There were surviving widows of Civil War veterans still receiving a pension as late as 1999.

However, funding such a massive pension system was not an easy thing. In 1893, for example, the $165 million spent on military pensions was the largest single expenditure ever made by the federal government. In 1894 military pensions accounted for 37 percent of the entire federal budget. The federal government found that the most economically and politically expedient solution was to rely on adjusting the tariff rate as necessary to pay for it. As a result, the McKinley Tariff of 1890 pushed the tariff rate to as high as forty-nine percent on some imported goods, which of course earned the enmity of non-veteran groups, particularly business organizations.

Moreover, despite the fact that America had a "social security" program in the form of Civil War pensions since 1862, this precedent did not extend itself to the general society.