These Upgrades Will Keep the B-52 Flying Into the 2040s 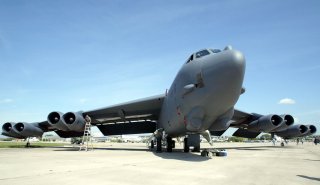 Two Air Force B-52 bombers and Japanese F-2 and F-15 fighters recently flew operations near the Chinese border over the Sea of Japan in a show of solidarity and resolve to function as a deterrent to Chinese provocations in the region.

While B-52s would need somewhat of a protected air-corridor in which to operate, given that it is likely quite visible to enemy air defense radar, they do continue to bring certain unique or dynamic elements to the fight. Despite their age, B-52s still present a substantial threat to adversaries by virtue of an ongoing multi-year Air Force effort to sustain and modernize the platform. Given the promise of the upgrades and the continued combat relevance and functionality of the B-52, the Air Force’s current plan is to keep the aircraft in the force until at least 2040 or so.

In recent years, Air Force and industry engineers have been equipping all 76 of the Air Force B-52s with digital data-links, moving-map displays, next-generation avionics, new radios and an ability to both carry more weapons internally and integrate new, high-tech weapons as they emerge. New, higher-tech radio communications and data links enable B-52 crews to receive updated targeting information, while in flight.

The Air Force is also giving the B-52 an upgraded Internal Weapons Bay designed to integrate more cutting-edge weapons systems. These include the Joint Air-to-Surface Standoff Missile and a system called Miniature Air Launched Decoy (MALD), and a MALD-J jamming variant.

The technical structure and durability of the B-52 airframes in the Air Force fleet are described as extremely robust and able to keep flying well into the 2040s and beyond—so the service is taking steps to ensure the platform stays viable by receiving the most current and effective avionics, weapons and technologies, Air Force weapons developers have said. The B-52 has a massive, 185-foot wingspan, a weight of about 185,000 pounds and an ability to reach high subsonic speeds and altitudes of 50,000 feet.