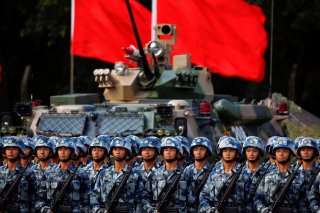 A just-released Department of Defense report on China’s military paints a sobering picture. Besides possessing the world’s largest navy and second-largest defense budget, the People’s Liberation Army (PLA) is drawing closer to nuclear parity with its Russian and American counterparts. The well-armed Communist behemoth we now face is not Soviet but Chinese.

What has helped abet its military rise are the many billions of dollars in investment that have poured into China since the 1980s. While firms from the United States and other advanced democracies set up shop, the Chinese Communist Party funneled part of its swelling national wealth into the PLA. Yet instead of the responsible stakeholder some hoped it would become, Beijing has turned into a menace with ever-growing ambitions in the Asia-Pacific and beyond. So much so that Defense Secretary Mark Esper said this February that China is the U.S. military’s primary long-term challenge.

Maintaining any sort of commercial relationship with Beijing is directly contributing to the PLA’s growing might. According to the Census Bureau, in 2019 U.S. exports to China totaled $106 billion, compared to $452 billion in imports. Doing this much business with our principal adversary was geopolitical malpractice. As Americans bought clothing, phones, and furniture, Beijing built destroyers, tanks, and missiles. Though tariffs and the pandemic are leading to a partial exodus of U.S. supply chains from China, an end to economic ties cannot come soon enough. The United States still has a massive trade deficit that has not yet shown a significant trend toward reshoring production. It makes no sense to keep feeding a tiger in hopes it will play nice. If the Communist Party’s wanton spreading of the coronavirus didn’t prove the futility of engaging Beijing, what will?

To advance the national interest, the Trump administration must do what may seem unthinkable. Political courage will be needed, as it was to levy Section 232 and 301 tariffs and ban travel from China at the onset of the pandemic. Cutting commercial ties will come at a high price. But letting them go on unabated will come at an even higher one. Contrast the temporary pains of shifting all supply chains in China elsewhere with the lasting damage of continuing to enrich the Communist Party on our dime. Neither marginal gains in GDP nor cheap goods justify strengthening our main adversary. Washington must force the hand of U.S. firms that will not sever ties of their own accord.

Free marketeers will rightly protest that doing so restricts economic freedom. But they should remember that Americans have no Constitutional right to commerce with a foreign nation. Take bans on U.S. firms doing business with Cuba, Iran, and North Korea. Americans have done just fine without those markets. When it comes to China, the free market has failed to curb the Communist Party’s malign behavior as it steals American intellectual property, harasses ships in the South China Sea, and condemns Uighur Muslims to slave labor camps. Washington must ensure no more American money subsidizes such malfeasance.

Those opposed to ending commercial ties may also argue that intertwined economies will preclude war. On this point, they are wrong again. At the beginning of last century, a robust trading relationship failed to stop Britain and Germany from taking up arms against each other. Several decades later, Imperial Japan’s reliance on the United States for almost all its oil did not avert war in the Pacific. Deterrence—through security guarantees and mutual assured destruction—will prevent a Sino-American clash. Economic ties will have no bearing on whether America will have war with this aggressive authoritarian regime.

Ending the commercial relationship will meet with vituperative criticism from the business community, politicians, and the foreign-policy establishment. Yet they will come to realize it was the right call. Whereas we can live with finding new overseas supply chains for U.S. companies, we very well may not be able to live with an increasingly powerful Communist Party. Washington has finally conceded its decades-long hope that trade would make China change its ways has failed. It must now concede that maintaining economic ties is inimical to U.S. interests.

Daniel J. Samet is a PhD candidate in History at the University of Texas at Austin.