Trump's Tariffs Are About Opening Markets, Not Closing Them 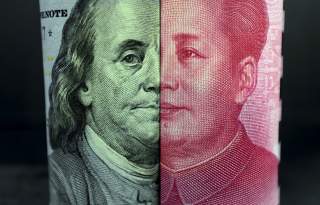 You can't call it “protectionism” when the United States uses tariffs to force other countries to end restrictive and predatory trade policies—and those countries retaliate by breaking international trade rules.

According to classical trade theory, free trade benefits everyone. In fact, economic theory says that unilateral free trade is the best policy, even when your trading partners practice protectionism. Outside the classroom, no one takes that idea seriously. But with an average effective tariff rate of just 1.61 percent, the United States is nonetheless among the freest traders in the world.

When the United States says “free trade,” it means it. The problem is that many other countries have similarly low tariffs but erect massive non-tariff barriers to trade. Whether it's arbitrary regulations, strategic industrial policies, or outright state subsidies, America's major trading partners do much more to protect their own companies (and jobs) than does the United States.

Since the end of World War II, the United States has opened its markets to the world, even though key American trading partners in Europe and Asia have always intervened aggressively to promote their industries. The European Union traces its very origins to a steel cartel, the European Coal and Steel Community, and Asian tiger economies are textbook cases of government intervention to promote export-led growth.

The Trump administration isn't breaking the world's trade rules. It's enforcing them. And that's what has so many people upset.

As talk of trade war explodes into a multimedia mushroom cloud, it's worth remembering how we got here. It all started when the Trump administration invoked Section 232 of the Trade Expansion Act to impose tariffs of 25 percent on imported steel and 10 percent on aluminum on the grounds of national security. These were quite modest compared, for example, to the Obama administration's 522 percent tariffs on cold-rolled steel. But then, anything having to do with Donald Trump tends to be larger than life.

Trump's tariffs got extra media play because they were imposed on friend and foe alike. But from the standpoint of preserving a domestic industrial base, it doesn't matter whether industries are put out of business by Chinese competitors or Canadians. No responsible U.S. president should give Justin Trudeau or Jean-Claude Juncker an effective veto on American military action, which is what the collapse of domestic steel and aluminum production would mean.

That collapse has been threatened by decades of unfair trade practices all around the world—but most of all in China. South Korea, Japan, the European Union, India, and of course China have all made strategic investments to build and protect their steel industries. In addition, Canada's province of Quebec has historically provided heavy subsidies to its aluminum smelters. The Trump administrations steel and aluminum tariffs were imposed to save what's left of American industry from long-term exposure to these unfair practices. They're not so much protective tariffs as subsidy offsets.

Look Who's Breaking the Rules

Under World Trade Organization (WTO) rules, countries are allowed to impose tariffs for reasons of national security. If other countries disagree with those national security claims, it's up to them to challenge the tariffs by initiating a legal case with the WTO. By imposing retaliatory tariffs on their own initiative, China, the European Union, and others are the ones breaking WTO rules. You'd never know that from listening to the international media—or to Trump's domestic critics.

In the narrower case of Trump's technology theft penalties on China, no one seriously doubts that China has been breaking WTO rules ever since it joined the organization. The Chinese government forces U.S. companies to transfer technology in exchange for market access, blocks U.S. companies from broad swathes of the Chinese economy, and directly engages in wholesale industrial espionage. That's to say nothing of rampant intellectual property theft conducted by Chinese companies that are effectively immune from prosecution in corrupt Chinese courts.

The Trump administration's broad China tariffs fall under Section 301 of the Trade Act and have not yet been imposed. They are part of an American case against China at the WTO, one that the United States is almost sure to win—if China is foolish enough to fight it. Even the European Union agrees that China engages in rampant intellectual property theft. Faced with massive potential tariffs that threaten its very existence as an export super-power, China is almost certain to settle before the tariffs are ever imposed.

America's allies and their apologists in the American media routinely vilify the Trump administration for pushing so hard on fair trade (to say nothing of NATO defense spending). The implication is that Trump should give them a break because they help defend the United States against China, Russia, and other rogue states. Such logic is not only dubious but completely backward. The allies are the ones being defended—by the United States.

It is ridiculous for America's European allies to accuse Donald Trump of cozying up to dictators like Vladimir Putin and Xi Jinping while they undermine American economic sanctions on Russia and condemn American trade pressure on China. And it is deceitful of Trump's domestic political opponents to suggest that the United States is the one breaking the rules.

The world's expert class likes to compare Trump's forceful defense of fair trade to 1930 Smoot-Hawley tariffs that supposedly caused the Great Depression. They fail to mention that throughout the 1920s the United States ran a massive trade surplus with a world that was having trouble finding the dollars to buy American goods. Today the United States runs an enormous trade deficit, and the world's exporters are awash in dollar reserves. Maybe it's time some of those dollars came home.

Salvatore Babones is the author of The New Authoritarianism: Trump, Populism, and the Tyranny of Experts, coming out this fall and available now for pre-order from Amazon.