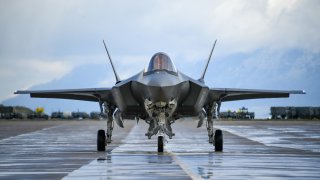 The Pentagon has confirmed that it will stop the deliveries of new F-35 fighter jets after Lockheed Martin found that a metal component used in the jets’ engines had come from China, according to a new Politico report.

An investigation into the component gained steam in mid-August and discovered that an alloy in the engine’s lubricant pump did not comply with U.S. procurement laws that bar unauthorized Chinese content, according to F-35 Joint Program Office (JPO) spokesperson Russell Goemaere.

Lockheed Martin, which manufactures the fighter jets, said that “the issue is related to a magnet on the F-35 Turbomachine manufactured by Honeywell that includes cobalt and samarium alloy."

Goemaere said that the magnet containing the alloy used in part of the integrated power package posed no security issues.

“We have confirmed that the magnet does not transmit information or harm the integrity of the aircraft and there are no performance, quality, safety or security risks associated with this issue and flight operations for the F-35 in-service fleet will continue as normal,” Goemaere said in a statement, per Politico.

“Defense contractors voluntarily shared information with DCMA [the Defense Contract Management Agency] and the JPO once the issue was discovered and they have found an alternative source for the alloy that will be used in future turbomachines,” he continued.

CNN reported that the Pentagon did not say how many aircraft deliveries are now delayed or how many had the Chinese alloy. Lockheed Martin is scheduled to deliver more than 150 F-35 fighters this year and has delivered 88 so far.

According to the Pentagon, Lockheed Martin has already found an alternative source of the alloy for future jet deliveries. Meanwhile, the DCMA is investigating how the Chinese alloy became embedded within the U.S. F-35 program.

“We are working with our partners and DoD to ensure contractual compliance within the supply chain,” Lockheed Martin spokesperson Laura Siebert said in a statement.

“The magnet has no visibility or access to any sensitive program information. The F-35 remains safe for flight, and we are working with the DoD to resolve the issue as quickly as possible to resume deliveries,” she continued.

Considered one of the most lethal and versatile aircraft of the modern era, the F-35 is flown by the U.S. Air Force, Navy, and Marine Corps, along with ten other countries. The aircraft comes in three configurations—the conventional take-off and landing F-35As flown by the Air Force, the Marine Corps’ vertical-landing F-35Bs, and the F-35C, configured for aircraft carrier operations.