Today is the Marine Corps' Birthday. And I Could Not Be More Proud. 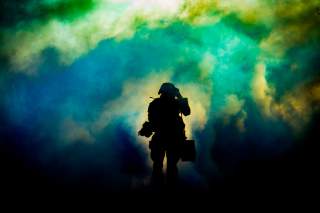 “We few, we happy few, we band of brothers; For he to-day that sheds his blood with me shall be my brother…” -Shakespeare, Henry V, Act IV, Scene iii

Among the Marine Corps birthday celebrations I recall from my twenty years on active duty as a U.S. Marine, the one I remember most fondly took place in 2004 at a training command at Fort Leonard Wood, Missouri—a large Army base that hosts training in various specialties for all of the services.

At that time, the Marine Detachment was the largest permanent detachment in the Corps, numbering some three hundred permanent personnel and training upward of seven thousand Marines each year after they graduated from basic training.

The Corps’ birthday is a very big deal for the service, and planning for it begins months in advance of November 10. It was no different for the Marine Detachment at Fort Leonard Wood.

There are a few items that are always a part of the celebration—a cake cutting, honoring the oldest and youngest Marines present, reading Major General Commandant John A. Lejeune’s first official birthday message (issued in 1921), and watching the latest birthday message from the current Commandant—though they vary in sophistication as local circumstances dictate. It’s hard to roll a large cake into a tent in the desert, or have a Marine band play a bit of John Philip Sousa at some outpost in Afghanistan.

Most formal balls also include a nod to the Corps’ history via a parade of period uniforms, worn by Marines, as a way of recalling that though accoutrements may change, the warrior wearing them stays the same—a young son or daughter of America serving their country often far from home and under difficult circumstances.

In 2004, the Marine Detachment Ball played things a bit differently. Rather than the conventional parade of uniforms from past eras, the Detachment Sergeant Major arranged to have Marines wearing such uniforms engage in a bit of theater.

After the ceremonial events had concluded, the ballroom lights were dimmed to almost darkness, with the occasional spot of subdued lighting here and there about the hall. On cue, each outfitted Marine slowly moved among the tables from the rear of the ballroom toward the front as if on a twilight patrol, holding the rapt attention of the crowd until he disappeared into the far shadows.

After the last had reached the end, the room was plunged into darkness.

Then there was an eruption of war cries, shouts of warning and encouragement, a tumult of movement as if the Marines were charging an enemy position. The din rose to a crescendo then broke into absolute silence as a single spotlight illuminated a platform in the center of the room to reveal the Marines, frozen in a recreation of Joe Rosenthal’s iconic picture of the flag raising on Iwo Jima.

The crowd, rising to their feet, erupted in wild applause and shouts of “ooh-rah!” I doubt there was a dry eye in the room.

Sometime later in the evening, after dinner and dancing, the Marines had settled into various small groups to chat and share stories. Music had been playing all evening, settling into part of the background noise.

There came a moment, though, when things seemed to get unusually quiet. Out of that stillness one started to hear the chirp of crickets followed by a low, distant rumble of helicopter blades, growing in intensity.

Someone had requested “Goodnight Saigon,” Billy Joel’s 1983 ode to those who had served in Vietnam. Though the elegy was meant to honor all who served in that controversial war so far from home, he specifically referenced Marines, so it quickly became a favorite within the Corps.

As the song played, perhaps a hundred Marines came together to form a giant circle, arms over each other’s shoulders, swaying to the music and belting out the lyrics with all their hearts, as off-key as you could possibly imagine but with such vigor, sincerity, and a palpable camaraderie:

“We met as soulmates

We left as inmates

And we were sharp

As sharp as knives

And we were so gung

ho to lay down our lives…”

“And it was dark,

So dark at night

And we held onto each other

We promised our mothers we'd write…”

“And we would all go down together

We said we’d all go down together

Yes, we would all go down together…”

I don’t know whether the youngest Marines really understood what they were singing—the deep meaning Joel had poured into the lyrics and the way he so movingly sang them. Certainly there were some among the older, more experienced Marines—the “Gunnies,” “Master Guns” and First Sergeants who “got it.”

But that wasn’t the point. The real point was a shared bond among Marines: old and young, combat veteran and neophyte, those nearing the end of their careers and those just getting started. What the moment captured was a shared identity, a tribal connection that went far beyond this specific celebration on this particular night. It embodied the spirit of Marines past, present and future.

In his order to all Marines, to “be read … on the 10th of November of every year,” Major General Lejeune noted that it was “fitting that we who are Marines should commemorate the birthday of our Corps by calling to mind the glories of its long and illustrious history.”

He recalled that nearly two-thirds of the Corps’ history to that date had included “action against the Nation’s foes” and that “[i]n every battle and skirmish since the birth of our Corps, Marines have acquitted themselves with the greatest distinction, winning new honors on each occasion until the term ’Marine’ has come to signify all that is highest in military efficiency and soldierly virtue.”

He recognized that such distinctions and reputation were bestowed by previous generations on those that follow, and that it was for the current generation of Marines to “be found equal to every emergency in the future as they have been in the past” so that fellow citizens would regard each generation of Marines as “worthy successors.”

There is something about shared adversity that creates bonds among people that cannot be matched in other circumstances. Tough training, long deployments from home and family, the visceral, undeniable realities of combat operations—these create conditions for people to rise to the occasion or to fail, with no way to disguise either or to hide amid the normality of a regular workaday world.

A fellow Marine and friend of mine, a man for whom I have the highest respect, epitomized this sense of shared brotherhood and tribal loyalty on his return, not too many years ago, from a rough combat tour in Iraq. He had lost several Marines to enemy action in and around Fallujah. The losses had struck everyone hard, but perhaps he felt the weight and sense of responsibility more than anyone else.

On the unit’s return to the United States, he and his sergeant major personally visited the family of every one of those Marines, at their own expense, before heading home to reunite with their own families. It was the right thing to do—the Marine thing to do.

It’s the sort of thing the old Marines back at Fort Leonard Wood knew to be at the heart of the Corps and the sort of thing those young Marines, singing a song written before they were born about a war they only knew from history class, had bought into, embraced as their own and fully expected to see once they executed their next set of orders sending them to their first operational unit. It is what defines a tribe and its unique culture. It is the Marine Corps.

The Marine Corps’ official “battle colors” is decorated with 54 streamers representing the major battles, campaigns, and expeditions in which the Corps has fought with distinction over its 243 years. It is quite a record and a testament to the service and sacrifices of all those who have “borne the title Marine.”

I have every confidence that those young Marines at Fort Leonard Wood who were getting their first taste of Corps traditions and its warrior culture nearly fifteen years ago went on to be “worthy successors,” maturing into the “Gunnies” who will bring along the next generation of Marines.

It’s a great Corps—it is my tribe—and I could not be more proud of it.

Dakota L. Wood is the senior research fellow for defense programs at The Heritage Foundation.