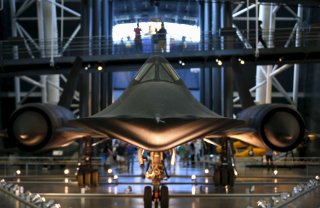 The latest Top Gun film opened to great fanfare and was a financial success for the franchise. Several scenes nestled into the film appear to show an advanced type of aircraft not yet seen before.

Brief images of the airplane reveal what could be the modern successor to the SR-71 Blackbird, the Cold War-era miracle of engineering that spied on the Soviet Union for the United States. And, in what could be promotional material for an actual aircraft, or simply a marketing tool to bring awareness to the Skunk Works division, Lockheed Martin released a slew of photos and information about the aircraft briefly seen in Top Gun.

Information pulled from the website explains that “Lockheed Martin Skunk Works® thrives on tackling seemingly impossible work, developing technologies for tomorrow’s challenges before the need is even identified.”

It touches on the company’s storied history of building some of the world’s most advanced aircraft, “from creating radar evading stealth capabilities to X-planes that redefine the sonic boom to many revolutionary technologies in between, Skunk Works has a long tradition of quickly developing enduring innovation for when it’s needed most.”

The website waffles on if the aircraft depicted in the film is an actual project Skunk Works is working on or just something for the silver screen. “When the Top Gun: Maverick team was looking to push the envelope and stand true to Maverick’s Need for Speed, Skunk Works was their first call,” the website explains.

“With the Skunk Works expertise in developing the fastest known aircraft combined with a passion and energy for defining the future of aerospace, Darkstar’s capabilities could be more than mere fiction. They could be reality…”

The artwork depicts a dual-engined aircraft that appears to be stealthy, with a specially-contoured fuselage designed to defeat enemy radar, likely capable of supersonic speeds like the Blackbird.

“Darkstar may not be real, but its capabilities are,” Lockheed Martin explains. “Hypersonic technology, or the ability to travel at 60 miles per minute or faster, is a capability our team continues to advance today by leveraging more than 30 years of hypersonic investments and development and testing experience.”

“The mission is to defend and protect our nation and allies with the discriminator of speed.”