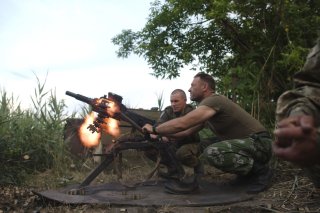 Moldova’s pro-Russian breakaway region of Transnistria said on Wednesday that shots were fired from Ukraine toward a village that houses an ammunition depot, raising renewed fears that the war in Ukraine could spill over into neighboring countries.

The head of the self-proclaimed Transnistrian Republic, Vadim Krasnoselsky, accused Ukraine of orchestrating the attacks. "As the first conclusions of urgent operational and investigative measures suggest, these attacks can be traced to Ukraine… I presume that those who plotted these attacks pursue the goal of drawing Transnistria into the conflict. I can say for sure that these attempts will fail," he said, according to a statement obtained by Russian state news outlet TASS.

Krasnoselsky called on Kyiv "to investigate the facts of the illegal relocation of particular combat groups and the terror attacks that they committed." Transnistria announced shortly following the alleged attacks that it is implementing additional security measures, including entry-exit checkpoints and routine inspections.

Without explicitly attributing the alleged attacks to Ukraine, the Party of Socialists of the Republic of Moldova (PSRM) said the incident was an attempt to draw the country into a broader conflict. "We follow with great concern the growing attempts of external forces to drag our country into an armed conflict. … The PSRM has repeatedly stressed that Moldova must maintain the neutrality status enshrined in our constitution, and the leadership in Chisinau and the entire political class must exclude any provocative actions that could have disastrous consequences for the country," PSRM executive secretary Vlad Batrincea said in a statement.

Moscow said that Kyiv, which has not taken responsibility for the attack, is engaging in irresponsibly "provocative" rhetoric regarding Transnistria. Ukrainian presidential advisor Alexey Arestovich was accused by Russian politicians and media outlets of suggesting in an interview that Moldova should ask Romania and Ukraine to help its military retake Transnistria by force. Kyiv has blamed Moscow for the bombings, describing it as a ploy by Russia to draw Transnistria into the war in Ukraine. "We have seen that another step is being planned by the Russian Federation ... it is clear why, really, to destabilize the situation in the region," said Ukrainian president Volodymyr Zelenskyy during a news conference, per Reuters.

Moldova—a former Soviet Republic with a sizable pro-Russian population—has stayed neutral over the course of the Russo-Ukrainian War, taking pains not to pursue policies or make statements that might aggravate Moscow. Recent polling shows that most Moldovan citizens favor European Union membership but remain opposed to joining NATO.