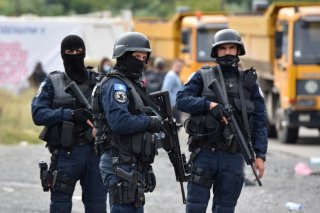 The government of Kosovo announced late on Sunday that it would suspend its implementation of a new rule requiring all license plates in the country to be issued by the central authorities in Pristina, following widespread protests against the rule by Kosovo’s northern Serb minority and growing regional tensions between Kosovo and Serbia.

During the protests on Sunday, Serbian demonstrators drove dump trucks filled with gravel and heavy equipment onto roads separating Kosovo’s predominantly-Serb areas in the far north from the predominantly-Albanian remainder of the country. In response, Kosovar border guards closed the Jarinje and Bernjak border crossings separating the ethnically Serb area from Serbia proper, which regards Kosovo as a rebellious province and has encouraged the protests.

A former autonomous province within Serbia, the overwhelmingly-Albanian Kosovo emerged as a flashpoint for ethnic tensions during the early days of the breakup of Yugoslavia in the late 1980s. Although Kosovo remained part of Serbia during the broader dissolution of Yugoslavia, tensions built throughout the 1990s, leading to a year-long guerrilla war against Serbia from 1998 to 1999 that ended with NATO’s eventual intervention in support of the Kosovar side. Following Serbia’s withdrawal from Kosovo, the territory gained its de facto independence but remains unrecognized by roughly half of the United Nations member states. Serbia has maintained independent ties with Serbs in northern Kosovo, and many of them regard themselves as Serbian rather than Kosovar, leading to recurring tensions.

Under the original plan proposed over the weekend, Serbians in northern Kosovo would have had a sixty-day transition period to replace license plates and identification documents issued by Serbian authorities with plates and documents issued by Kosovar ones. A similar plan was initially proposed in 2021 but scrapped after an earlier wave of protests.

Pristina also announced that it would require an additional document from Serbian citizens to enter Kosovo—mirroring an existing rule requiring Kosovar citizens to register before entering Serbia. Following the protests, the government announced that it would delay the implementation of that rule until September 1. Taken together, the two changes are expected to calm the protests and restore the status quo, according to Josep Borrell, the European Union’s top diplomat.

The increase in ethnic tensions in northern Kosovo led NATO’s Kosovo Force (KFOR) to issue a statement claiming that it was “monitoring [the situation] closely” and was “prepared to intervene if stability is jeopardized.”

“KFOR will take whatever measures are necessary to keep a safe and secure environment in Kosovo at all times, in line with its UN mandate,” the statement read.