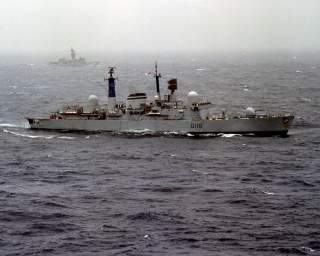 On the afternoon of April 30, 1982, the War Cabinet of Prime Minister Margret Thatcher transmitted a message to three Royal Navy submarines in the South Atlantic—designating the carrier Veinticino de Mayo a priority target to be hunted down and destroyed.

The Argentine carrier—ironically, of British origin—posed an unpredictable threat to the Royal Navy taskforce commencing amphibious operations to retake the disputed Falkland Islands following their seizure by Argentinian troops on April 2, 1982.

The ensuing nine-day game of cat-and-mouse between British submarines and the anti-submarine aircraft onboard the Veinticinco is recounted in A Carrier at Risk by Mariano Sciaroni, who compares interviews with Argentine sources with Reports of Proceedings filed by British submariners to shed new light on a formerly obscure subject.

Sciaroni’s book not only serves as a primer for the anti-submarine tactics and technology of the time, but features many maps plotting day-by-day movements of the combatants and numerous photos and color illustrations depicting the vessels and aircraft engaged. Sciaroni also captures the routines and human foibles of wartime life at sea, such as quarrels over stocking snacks in the pilot ready room and fearful crewmen sleeping at their stations in life vests.

The Veinticinco Races for the Coast

By May 1982 three British hunter-killer submarines in Task Force 324 were patrolling exclusives zones around the disputed islands. The older Churchill-class Conqueror hunted south of the Falklands, while more modern and quieter Swiftsure-class attack subs Splendid and Spartan patrolled northwestern and northeastern quadrants respectively.

All three 5,400-ton nuclear-powered submarines could sustain up to 26-30 knots without needing to surface for air and were armed with Mark 24 Tigerfish acoustic homing torpedoes with a range of 13 miles, and World War II-vintage Mark 8 torpedoes designed to fire in a straight line. As the Tigerfishes were unreliable versus surface targets, the short-range Mark 8s were preferred.

The nuclear-powered Courageous and Valiant and the diesel-electric Onyx would arrive later in the conflict.

In fact, on May 1 one of Veinticinco’s S-2E Tracker planes located the British fleet first. The Veinticinco prepared to launch its A-4Q Skyhawk jets to attack the British carriers—only for the Skyhawks to be grounded by unusually long-lasting dead wind.

The Veinticinco’s skipper, José Julio Sarcona, realized his taskforce now was on the verge of being annihilated by the Royal Navy’s quantitatively and qualitatively superior forces, so he turned Veinticinco westward and made full steam for the Argentinian coast. However, the carrier’s troublesome boilers limited her to limping at 18-20 knots—meaning the British subs might easily overtake her.

The retreating Veinticinco was firmly in the hunting ground of Splendid under Commander Roger Lane-Nott. Her sistership Spartan could easily have joined the hunt but was denied permission to avoid potential friendly fire incidents.

The Veinticinco adopted a zig-zag course over shallow waters that would force pursuing submarines to slow down to avoid running aground. Her escorting destroyers were spaced five miles to her left, right and front: two British-built Type 42 destroyers, Hercules and Santisima Trinidad, and the older Py, a Gearing-class destroyer formerly named USS Perkins equipped with a longer-range sonar.

The Tracker’s secondary sub-hunting sensors included APS-88 surface-search radar and an electromagnetic (ESM) sensor that could detect radar and radio emissions. Despite not needing to surface for air, the British submariners still rose close to the surface every few hours to receive orders, transmit reports, and observe with their periscopes—during which time they were more exposed to detection.

When a Tracker acquired a Possible or Probable contact (POSSUB, PROBSUB), it’s crew would visually inspect the area and comb low over the sea using a short-range Magnetic Anomaly Detector. If a submarine appeared to be nearby, the Tracker could then parachute-drop a Mark 44 lightweight homing torpedo. This would swim in circles scanning the water with its active-sonar until it acquired a target. Trackers also hefted two 350-pound Mark 54 depth charges for dropping directly above a submarine.

The carrier also disposed of two S-61D-4 Sea King helicopters that could lower an AQS-13A dipping sonar into the water with an effective range of three miles. The Sea Kings also were armed with depth charges and torpedoes, but were slower (max 166 miles per hour), and had only a few hours endurance.

The Argentinians could have used active-sonar which “pings” the water with sonic waves to more aggressively locate the British hunter-killers. But senior Argentinian officers insisted on using only passive hydrophone sonar, not wishing to broadcast anything that could be traced back to them, compromising their position.

Indeed, by May 3 Splendid was close to heading off the retreating carrier, repeatedly establishing visual contact with Veinticinco’s escorts—but not the carrier itself. The British submariners were also acutely aware of the aircraft hunting them thanks to their own ESM systems.

For example, at 5:30 AM on May 4 the Splendid detected the radar of a Tracker and dove deep to avoid detection. An hour later, her sonar acquired multiple contacts—the Veinticinco and her destroyers!

By the time the British submarine closed within torpedo range, however, all but one large, slow ship had passed into Argentinian territorial waters, beyond which they were forbidden from attacking. Splendid ascended to periscope depth to visually identify the last remaining contact target prior to launching torpedoes—only to discover it was the cargo ship Formosa! Splendid had fallen just short of her prey.

While Splendid continued to search south, Veinticinco steamed northward up Argentina’s coast, her Trackers continuing to scour the seas. At 7:43 AM on May 5, a Tracker pilot visually acquired what appeared to be a submarine snorkel heading north, and released a Mark 44 torpedo, which splashed into the water and disappeared.

Two Sea Kings were quickly scrambled to pick up the chase, one of which detected a faint mechanical signature with its dipping sonar. A second Tracker dropped a trio of sonobuoys and began swooping low over the water to use its MAD sensors, which repeatedly reported faint contacts.

After an hour, the Tracker released a second homing torpedo, which pinged rapidly as if its active sonar had acquired a target. But again, the torpedo vanished.

In fact, Sciaroni discovered that Splendid was over 130 miles to the south at the time. Even stranger—Splendid too reported sonar contact with what sounded like a diesel-electric submarine, assumed (incorrectly) to be the Argentinian submarine Salta. Lacking loaded anti-submarine torpedoes, Splendid retreated. Sciaroni speculates the British and Argentine sonars might have picked up a Soviet, Chilean or U.S. submarine passing through the conflict zone.

By May 7, damage to one of Splendid’s turbochargers forced her to retire, while sistership HMS Spartan cruised northward to finish off Veinticinco. But Spartan too found her patrol constrained by the shallow, transparent waters the Veinticinco was cruising in, and was unable to close with the carrier during daylight hours. Veinticinco finally slipped into port at Viedma on May 9, bringing an end to the hunt.

However, Sciaroni argues the Trackers and Sea Kings likely saved Veinticinco by constraining the British submarines’ freedom of maneuver, forcing them to hunt more slowly and cautiously. Indeed, in World War I and II, anti-submarine aircraft were just as important for preventing submarines from attacking as destroying them outright

The British submariners may have lost their shot at a carrier, but could remain content with having played a decisive role compelling the Argentinian fleet to retire from the conflict in the first place.