Trump Should Worry: Iran Could Do Massive Damage In the Next Regional War 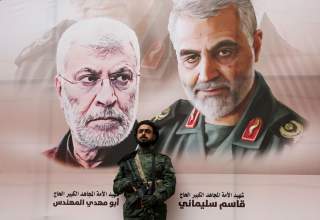 Key Point: To date, both Iran and Israel have pulled their biggest punches. But Tehran and its proxies can inflict far more serious damage than the Abqaiq attack—if they choose to do so.

Major conflict looms in the Middle East, and Iran is already on track to win. Its September surprise attack on the Saudi oil facility at Abqaiq and the glaring lack of response is a microcosm of how Tehran is busy gaining the strategic upper hand over the United States and its allies.

Using swarms of new long-range precision munitions, Iran and its proxies can now credibly threaten to conduct disabling, and potentially catastrophic strikes against vital strategic targets across the region. This is a function of three factors: Iran’s upgraded weapons, regional expansion to encircle its enemies, and the lack of strategic depth possessed by these enemies.

Amazingly, Iran is building this leverage despite sanctions, antiquated conventional military forces, a small defense budget and no nuclear weapons. Instead, it is creating clear offensive advantages by increasing the precision and range of its ballistic and cruise missiles and drones.

Though they receive less attention than nuclear delivery vehicles, advancements in the range, lethality and accuracy of Iran’s conventional short-range ballistic missiles (SRBM) are at least as worrisome. It is also producing anti-ship ballistic missiles with enhanced terminal guidance and maneuverability.

Cruise missiles are also overlooked even though they are arguably more important. Iran has increasingly precise land-attack cruise missiles like those that were used to damage Abqaiq and some can range the entire Middle East. And it is producing longer-range anti-ship cruise missiles (ASCM) launchable from mobile land batteries or swarms of missile boats, which a recent Pentagon report called the “capital ships” of Iran’s Persian Gulf fleet. Iran is also developing submarine-launched ASCMs.

Drones—specifically unmanned aerial and naval surface vehicles—form the third leg of Tehran’s triad. Often called “the poor man’s precision munition,” Iran and its proxies use these in kamikaze-style attacks, with the vehicle often doubling as the warhead. Recently, Iran has improved these weapons’ accuracy, partly by reverse-engineering captured Western models.

Tehran is also exporting these weapons regionwide. Hezbollah in Lebanon and the Houthis in Yemen have growing arsenals of Iranian-supplied precision SRBMs, ASCMs and drones, and Iran is trying to provide Hezbollah kits to convert thousands of unguided rockets and large-caliber artillery rounds to precision munitions. Iran is also supplying SRBMs and drones to Syrian and Iraqi proxies.

Combined with the growing range of its precision munitions, Iran’s proliferation is encircling its adversaries with overlapping fields of long-range precision fires, or as Israelis call it, a “ring of fire.” Increasingly, Gulf countries can be targeted from Iran, Iraq and Yemen; Israel must countenance strikes from Lebanon, Syria, Iraq and eventually Yemen, too. U.S. forces can be hit from any of Iran’s beachheads.

This encirclement bolsters the total force Iran can employ against its adversaries, even over great distances. Additionally, Tehran has the initiative to attack from the direction of its choosing, or several directions simultaneously, while confronting defenders with the Sisyphean task of providing 360-degree protection.

This omnidirectional threat also compels Iran’s enemies to spread their counter-efforts more thinly: for years the Saudis and Emiratis were mired in Yemen, and today Israel plays whack-a-mole on multiple fronts.

This deepening of Iran’s strategic depth further erodes that of its adversaries, which already is limited to very small numbers of very important targets. With its new weapons and regional expansion, Tehran is accruing significant strategic leverage by holding these critical targets hostage.

Currently, some sixty thousand U.S. troops are deployed in the Middle East, but they are concentrated in large nodes in Iraq, a few air and naval bases in the Persian Gulf, and on warships. America’s regional allies operate from mere handfuls of air and naval bases, too.

For years, the Houthis have struck at precisely these vulnerabilities, using precision missiles and drones against Saudi government buildings, military bases, airfields, pipelines and pumping stations, plus merchant ships, tankers and U.S. and allied naval forces around the vital Bab el-Mandeb chokepoint.

Seen in this larger context, the importance of the Abqaiq attack goes far beyond oil. In just 17 minutes, 18 drones and seven cruise missiles that had traveled four hundred miles from the northeast on low-flying, maneuverable trajectories caused significant damage to multiple buildings at the world’s largest oil processing facility. Meanwhile, Saudi defenses faced southwest toward Yemen. Iran reportedly considered attacking a seaport, airport or U.S. military base before choosing Abqaiq.

Perhaps most tellingly, Riyadh did nothing in response while Washington offered a mere sanctions hand-slap. This highlights just how much Iran’s development and proliferation of long-range precision munitions are translating into real strategic advantages.

Well before Abqaiq, the United Arab Emirates already hedged toward Tehran— including ending operations against the Houthis. The United Arab Emirates also began discussing maritime security with Iran, even while they watched Iranian forces assault freedom of navigation in the Persian Gulf. Since Abqaiq, Riyadh has begun quietly following UAE’s lead, while the United States shows clear reluctance to escalate beyond economic measures.

Israel is certainly much more kinetic and proactive against Iran. Yet Hezbollah is a “fleet in being,” or holding force, constraining Jerusalem’s freedom of action. Israel essentially tolerates regular rocket fire from Gaza as a distraction from its northern front. Hezbollah also threatens massive retaliation for more forceful Israeli action against Iran.

To date, both Iran and Israel have pulled their biggest punches. But Tehran and its proxies can inflict far more serious damage than the Abqaiq attack—if they choose to do so. And American and Israeli officials warn that Tehran is not deterred and to expect further attacks.

Accordingly, a true U.S. “maximum pressure” strategy would move beyond sanctions, to deter and degrade Iran’s use and proliferation of precision munitions in the first place. The Trump administration’s recent strengthening of Gulf ballistic missile defenses, while necessary, is insufficient. Cruise missile defenses, including close-in weapons systems, can better detect and defeat Iran’s arsenals. Though difficult, the United States and its regional allies also need to coordinate their stovepiped missile defenses.

That takes time. More immediately, the United States and others can start enforcing UN weapons embargos on Iran and Yemen by interdicting Tehran’s weapons transfers. The United States also should ensure Israel has the platforms and munitions to continue countering Iranian proliferation.

American officials are rightly emphasizing the need to restore deterrence against Iran. Getting there requires the United States to push back with real urgency against an adversary that is already gaining the strategic upper hand in the Middle East.

This article first appeared in January 2020. It is being republished due to reader interest.

Image: A Houthi militant stands by a billboard with posters of Iraqi militia commander Abu Mahdi al-Muhandis and Iranian military commander Qassem Soleimani during a rally by Houthi supporters to denounce the U.S. killing of both commanders, in Sanaa, Yemen January 6, 2020. REUTERS/Khaled Abdullah