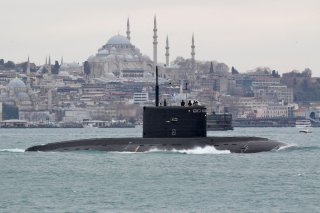 In a surprising move, Turkish foreign minister Mevlut Cavusoglu announced that Turkey would close the Dardanelles and Bosporus straits to warships. Cavusoglu told reporters that the Turkish government warned all countries to refrain from sending warships through the strategically located straits.

“When Turkey is not a belligerent in the conflict, it has the authority to restrict the passage of the warring states’ warships across the straits,” Cavusoglu explained, according to Naval News.

“If the warship is returning to its base in the Black Sea, the passage is not closed. We adhere to the Montreux rules. All governments, riparian and non-riparian, were warned not to send warships across the straits.” Turkish president Recep Tayyip Erdogan concurred, saying, “Turkey will use its authority over the Turkish Straits under the 1936 Montreux Convention to prevent the Russia-Ukraine ‘crisis’ from further escalating.”

The closure comes at the urging of Ukrainian officials, who called on Turkey to close the strait to prevent access by Russian naval ships en route to the Black Sea.

Turkey appears to have exercised its right to prevent passage by warships under Article 21 of the Montreux Convention, the internationally-recognized regime regulating the passage of the narrow body of water between the Mediterranean and the Black Sea.

Article 21 states that “should Turkey consider herself to be threatened with imminent danger of war she shall have the right to apply the provisions of Article 20 of the present Convention.”

Despite the announcement, Russia’s adherence to the convention has traditionally been spotty. In June of 2020, a Russian submarine passed through the strait in an apparent violation of the Montreux Convention. Future compliance, especially as Russia fights an increasingly fraught battle against Ukrainian forces, is questionable.

Ukrainian president Volodymyr Zelensky tweeted his thanks to Turkey, saying, “I thank my friend Mr. President of Turkey … and the people of Turkey for their strong support. The ban on the passage of Russian warships to the Black Sea and significant military and humanitarian support for Ukraine is extremely important today. The people of Ukraine will never forget that!”