Did Russia Just Send a Submarine Through the Bosphorus? 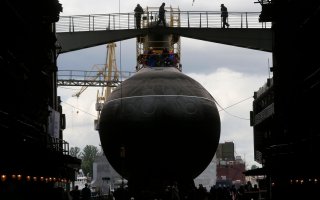 In a Twitter post, a respected Turkish ship spotter showed evidence that a Russian Kilo-class submarine allegedly passed through the Bosphorus, in violation of the Montreux Convention. At press time, we were unable to confirm the report independently, however, if true, the news would be very significant.

The Montreux Convention, officially known as The Montreux Convention Regarding the Regime of the Straits, was signed in 1936 and strictly regulates naval traffic through the Bosphorus, a narrow passage that separates Greece from Turkey and connects the Black Sea to the Mediterranean. Although merchant vessels enjoy unrestricted access to the Bosphorus and can pass without restriction, so-called vessels of war are subject to various restrictions, depending on their country of origin, where they were built or purchased, and their tonnage.

Regarding submarines specifically, the Turkish Ministry of Foreign Affairs states that, “only submarines belonging to riparian states can pass through the Turkish Straits, for the purpose of rejoining their base in the Black Sea for the first time after their construction or purchase, or for the purpose of repair in dockyards outside the Black Sea.” This crafty submarine appears to be acting in violation of this clause.

According to the respected naval expert H I Sutton, Russia’s Black Sea Fleet does not have any nuclear-powered submarines, though it received several Project 636.3 Kilo Class submarines. These diesel-electric attack submarines can fire land-attack and anti-ship missiles in addition to their standard torpedo armament. While the Romanian Navy also has one Kilo-class submarine, it reportedly hasn’t sailed for years and therefore is likely not the same Kilo submarine as the one in this incident.

Sutton explained the implications of this latest maneuver, writing that,

“Russia has been unhappy with the details of the agreement in the past, but has adhered to the terms in respect of submarines. Despite this Black Sea Fleet submarines have been deployed to the Mediterranean. They even fired cruise missiles into Syria. But they got there via a different route. Those submarines deployed to Syria before they were delivered from their shipyards, to the Black Sea. They thus passed through “for the first time after their construction.” This latest move cannot be explained this way.”

If Moscow did violate the treaty, what are the implications of this new Russian boldness?

If the Montreux Convention continues to be flouted, Russia could potentially move submarines—and other surface warships—through the Bosphorus with impunity, and potentially strengthening their position in either the Mediterranean or the Black Sea.

The Mediterranean is a place of particular interest to Russia. Now, with confirmed reports of Russian activity in Libya, Russian interest in the Mediterranean makes sense and could serve to strengthen their position and defend their interests along Europe’s southern border.

Likewise, if the Montreux Convention is dead, then there could be an incentive for other countries to sail their own warships or submarines into the Black Sea to monitor or challenge Russia’s Black Sea Fleet. Watch this developing situation closely.