Russian Mercenaries are Flying in Libya. What Are They Doing? 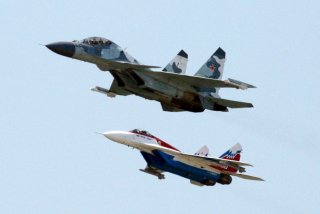 In a press release, the United States Africa Command showed photographic evidence that Russian aircraft are flying missions in Libya. The jets in question come on the heels of over a dozen other Russian aircraft that flew into Libya from Russia in late May. During that flight, U.S. Africa Command reported that fourteen or more MiG-29s and a few Su-29s had their Russian aviation markings painted over in order to camouflage their true origin.

The photographs that AFRICOM referenced earlier this week showed a MiG-29 flying near Sirte, situated next to the Mediterranean along Libya’s northern coast. Another Russian jet was photographed taking off from an airfield in al-Jufra, an arid and sparsely populated region in central Libya.

The AFRICOM director of operations, U.S. Marine Corps Brigadier General Bradford Gering, said that the jets were definitely foreign. “We know these fighters were not already in Libya and being repaired,” and that no mistake should be made when trying to determine the origin of the planes. “Clearly, they came from Russia. They didn’t come from any other country.” In addition to the jets, the imagery AFRICOM referenced showed a Soviet-designed mobile early warning radar system known by its NATO reporting name as Spoon Rest.

Though the jets are Russian, it is unclear who exactly is piloting them. Gering raised the possibility that Russian soldiers-for-hire rather than Russian soldiers may be behind the yoke, saying “There is concern these Russian aircraft are being flown by inexperienced, non-state PMC mercenaries who will not adhere to international law; namely, they are not bound by the traditional laws of armed conflict.”

It would not be the first time that Russian mercenaries involved themselves in conflicts abroad. Often acting with explicit consent from the Russian Defense Ministry, Russian private military companies are involved in over a dozen African countries.

The most prominent of these, the Russian PMC Wagner, appears to serve two purposes—both the advancement Russian geostrategic objectives, and personal enrichment. The countries Wagner is active in are generally chaotic, with a weak central government, and more often than not are rich in natural resources, including gold, diamonds, and uranium. AFRICOM estimates there are about 2,000 Wagner members in Libya alone.

The Wagner group has also been involved in conflicts in the Central African Republic, Crimea, and Sudan. Latin America is no stranger to the group either. Venezuela likely still hosts a contingent of Wagner mercenaries that came in support of Nicolás Maduro’s regime.

One of the concerns that Gering raised was the risk of civilian casualties caused by Russian PMCs in Libya. Unbound by the rules of war, Libyan civilians are most at risk, as is any quick end to Libya’s ongoing six-year civil war. “Russian interference and masking of activity in Libya is visible and delaying progress,” Gering stated, and ended emphatically by saying, “progress the people of Libya deserve.”