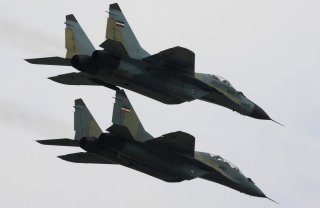 The Mystery of Iran’s MiG-29s

While Russia’s MiG-35 is certainly the more capable airframe, the MiG-29 is no lightweight either. But how did Iran, in the face of sanctions, acquire MiG-29? Hint: The collapse of the Soviet Union was like the Wild West for arms markets.

The Soviet Union’s first fourth-generation fighter—the MiG-29 was faster than what NATO countries had, though limited by a somewhat short range. According to an American pilot who was able to fly Polish MiG-29s, the MiG-29 was “highly maneuverable when needed but seemed to use a lot of fuel to make that happen.”

Although an older airframe and perhaps lacking compared to more modern airframes, the MiG-29 is nonetheless still capable—and that’s why Iran bought it.

The purchase was nothing unusual for the time, as the United States had been in the market for high-tech Russian tidbits after the fall of the Soviet Union. Cash-strapped Moldova had no use for the high-tech fighters, and apparently gladly sold them to the United States.

The arms purchase was part of the “U.S. Cooperative Threat Reduction program, a three-year-old, $380-million effort to move to safety many of the remnants of the Soviet arsenal” and was intended to prevent Iran from gaining an edge over its regional adversaries.

Under the U.S. Cooperative Threat Reduction program, the United States bought up a large number of technologies it wanted to keep out of the hands of terrorists, adversaries, or rogue states like North Korea or Iran.

Perhaps the most notable success of the program was the fascinating story of Project Sapphire, in which teams from the United States clandestinely flew to Kazakhstan to remove large quantities of uranium that had been misplaced and forgotten after the Soviet collapse.

Too Little Too Late?

Perhaps it was not enough. The New York Times reported in 1992 that Iran had acquired an enormous arms package from a number of Eastern European countries, as well as China and North Korea.

“The Saudi and French officials, who spoke on condition of anonymity, said Iran spent or committed $3.2 billion on arms in 1988 and 1989, primarily to the former Soviet Union for MIG fighters and tanks.”

In the heady days after the Soviet collapse, the purchase came often. “In 1990 and 1991, these officials say, Iran spent or pledged $4 billion more to buy tanks, missiles and fighter jets. . . . These weapons most of which have been acquired, include 24 MIG-31s, 24 MIG 27s, 68 MIG-29s, 12 Tupolev-22 M bombers and several radar-detecting Ilyushin 76s, largely bought from the former Soviet Union and from Russia.”

Although Iran’s airframes are piously old and incredibly overworked, they are still potent in some scenarios. American efforts may have been in vain after all.