Turkey Is Charting Its Own Path On Economics and Foreign Policy 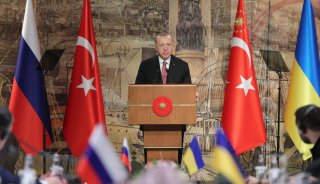 Ahead of Turkey’s presidential and parliamentary elections scheduled for June next year, President Recep Tayyip Erdogan is a man in desperate need of solutions. The Turkish economy is tanking—March’s inflation is estimated to top 60 percent, and in defiance of conventional economic theory Erdogan insists on maintaining the central bank’s benchmark rate at 14 percent.

The president has called interest rates “the mother and father of all evil” and in December, in a direct address to the Turkish Industry and Business Association (TÛSIAD), said that as a Muslim he would continue to lower interest rates in accordance with Islamic teaching.

According to Turkish columnist Erdal Saglam, Erdogan receives advice from an Islamic theologian when deciding on monetary policy.

Be that as it may, Turkish consumers have been faced with massive price hikes in the cost of electricity, gas, and even sugar.

Ten years ago, Erdogan declared his aim to create “a pious generation,” but that too has backfired, despite the massive increase in the number of imam-hatip (religious) high schools. The curriculum for ordinary schools has also been radicalized to reflect his views.

After the attempted coup in July 2016, columnist Mehmet Yilmaz wrote of Turkey as “a place where ignorance rises to the top and where literate people are looked down on as pretentious.” This is reflected in the brain drain among Turkish doctors and that over 70 percent of Generation Z (young people aged between eighteen and twenty-five) would prefer to live abroad.

A new poll shows that a majority of this generation would vote for the opposition against Erdogan’s AKP (Justice and Development Party) government.

Another feature of traditional Turkish society that Erdogan’s Islamic rule has tried to suppress is drinking raki (absinthe, pastis, ouzo), so that social life has been crippled by astronomic tax increases. In 2002, when the AKP came to power, a bottle cost 7 lira but now 249 lira ($17), which is beyond the reach of most Turks.

In the meantime, the presidential couple enjoys a modest lifestyle, which includes drinking white tea, which likewise is beyond the reach of most Turks.

Driven both by the collapse of the economy and Russia’s invasion of Ukraine, Turkey’s foreign policy has perforce taken a new turn. It was the Turkish professor, Ahmet Davutoglu, who first was Erdogan’s foreign policy advisor and later foreign minister and prime minister, who was the driving force behind an expansionst foreign policy dubbed “neo-Ottoman.”

Davutoglu dreamed of a new world order (“nizam-i âlem”), an Ottoman concept whereby the world order, political, social, and economic, was ruled by religion (Islam). The Lebanese daily Dar Al-Hayat even called on Erdogan to restore the Ottoman empire and be the caliph of all Muslims.

This, however, also backfired, so that Lebanese editor, Jihad al-Zein, a former AKP supporter, in 2013 opined that Erdogan’s behavior seemed closer to that of an old-style Arab military ruler.

As a result, Ibrahim Kalin, who supplanted Davutoglu as chief policy advisor and now is Erdogan’s spokesperson, plaintively tweeted of Turkey’s “precious loneliness,” as it had alienated practically all its neighbors.

This is the same Kalin who, in a keynote speech at the Istanbul Forum in 2012, posited a new geopolitical framework that rejected Western values in favor of an undefined value-based and principled foreign policy.

A week ago at the Doha Forum 2022 in Qatar, Kalin was back again, calling for a new global security architecture, yet again without defining what it should consist of. But the implication is clear. Addressing the present crisis in Ukraine, he made clear that the equilibrium that has shaped the international order since the end of the Cold War has everything to do with the crisis.

This dovetails with the current mood in Turkey, where some 48 percent blame the United States and NATO for the war in Ukraine, while 33.7 percent of Turks said Russia was responsible.

Kalin not only stressed how Turkey has played a counterbalancing role against the Russian-backed regime in Syria, but also how Turkey’s mediation between Russia and Ukraine was made possible because of Turkey’s good relations with both countries. Again, he considered that these mediation efforts will be key in terms of shaping a new security architecture.

Commenting on Erdogan’s pivot from Eurasianism to Atlanticism, columnist Semih Idiz questioned whether the Turkish leader is ultimately sincere. Many believe Erdogan can easily change tack again based on how the wind blows, which in my view is hardly surprising.