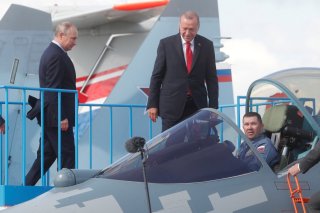 The Turkish Armed Forces should be seen as a serious and powerful military force. It is currently the second-largest standing military force in NATO after the United States, and it has sought in recent years to upgrade its military hardware accordingly. However, Ankara's decision to adopt the Russian-made S-400 "Triumf" air-defense system resulted in it being expelled from the Lockheed Martin F-35 Joint Strike Fighter program as U.S. officials and NATO leaders argued that the two systems were not compatible and it could compromise the security of the aircraft platform.

Turkish president Tayyip Erdogan had said on the record that his nation had invested some $1.4 billion to acquire more than 100 of the fifth-generation F-35 stealth fighters. Turkey has long been a traditional customer of Western manufacturers, and the current Turkish Air Force fleet is comprised of some 48 F-4E and 245 F-16C/D fighter jets—and at least 200 of those latter aircraft are expected to be phased out by 2035.

Erodgan has been pressing the Biden administration to deliver two of the F-35s that were built for the Turkish military or return the nation's $1.4 billion payment. This has resulted in cracks in the U.S.-Turkish alliance, but on Sunday it was reported that the United States has proposed a deal that would see the sale of forty upgraded Lockheed Martin-built General Dynamics F-16 fighters as compensation for its exclusion from the F-35 program.

On Monday, TASS reported that Ankara could be ready to consider purchasing Russian-built Sukhoi Su-35 or Su-57 fighter jets if Ankara fails to reach a deal with Washington.

"If the United States does not approve a deal on the F-16s after the situation with F-35 aircraft, Turkey won't be left without alternatives," Ismail Demir, head of the Turkish defense industry said on Sunday on Turkish NTV television. "The issue of Su-35 and Su-57 planes may surface again at any time."

Whether this is posturing, as well as an attempt to get a better deal from the United States, isn't clear—but as noted, Turkey has been a customer of Russian-built hardware in the past. Moscow and Ankara inked a deal in 2017 for the delivery of Russian-made S-400 air defense systems to Turkey, which made it the first NATO member to purchase this air defense weapon from Russia.

Yet, while Ankara and Moscow have moved closer in recent years, the two nations have been territorial rivals for centuries and are actively supporting different sides in the ongoing Syrian Civil War.

The Turkish military has been working on its TF-X program, its first indigenously-built fighter jet, and while it had previously set a timetable to fly the stealth aircraft by 2025 or 2026, the program has been reported to be behind schedule. That could explain why Ankara is looking for a refund on its F-35 investment while it seeks foreign aircraft to fill the void as it continues to struggle with the TF-X.