Is the UK Considering Cutting Its Order for the F-35? 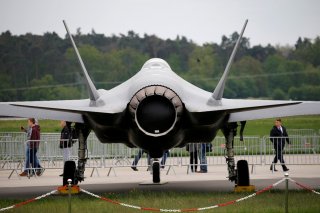 Are they in or are they out? For now, it seems that the United Kingdom is in, but perhaps not fully in when it comes to its commitment to the Lockheed Martin F-35 Lightning II. The UK’s Ministry of Defence (MoD) has reportedly been debating whether to scale back its order and only move forward with 48 of the fifth-generation fighters, down from the previous commitment to purchase 138 of the jets.

According to a report that first circulated in The Sunday Times, ”an order for 90 more F-35 Lightning combat jets is to be cancelled in favor of the Tempest fighter, built in Lancashire, while 24 older Typhoon fighters will be retired early. Whole fleets of aircraft will be taken out of service as drones become ever more common.”

The news that the UK might slash the order isn’t actually surprising, and if this sounds familiar the reason is that last summer it was also reported that the MoD was considering halving the order. By the end of 2020 the MoD reversed course, and with a significantly increased military budget, it seemed that additional F-35s could be soon landing for service in the UK.

Now it seems the course has been changed yet again.

“Things change in the course of these very long-term programmes,” the MoD’s Permanent Secretary Sir Stephen Lovegrove said in a statement as reported by UK Defence Journal. “Different capabilities come along that render things that you have yet to buy possibly obsolete or perhaps you need fewer of them or the threats change.”

According to reports, the final details of the program’s future will be determined on Tuesday, March 16 when The Integrated Review of Security, Defence, Development and Foreign Policy is set to be released. British Prime Minister Boris Johnson has described the review as the largest of its kind since the Cold War.

However, the UK seems poised to cancel all future F-35B purchases, even as the aircraft are already in the early stages of deployment on the Royal Navy’s flagship HMS Queen Elizabeth aircraft and will see deployment on her sister ship HMS Prince of Wales.

The first of the short takeoff and vertical landing (STOVL) aircraft arrived at RAF Marham in June 2018 to see service with the 617 Squadron “Dambusters.”

Lockheed Martin, the prime contractor for the F-35, has also noted that the UK is the program’s only Level or Tier 1 partner, and the UK has garnered a tremendous economic benefit from the aircraft.

“British industry will build 15 percent of each of the more than 3,000 planned F-35s, generating significant export revenue and GDP growth,” the official website for the program stated. “The program is projected to create and support more than 21,000 jobs across every region of the United Kingdom. The fingerprints of British ingenuity can be found on dozens of the aircrafts key components. BAE Systems, GE Aviation, Martin-Baker, Leonardo Cobham, Ultra Electronics, UTC Actuation/Collins Aerospace and Rolls-Royce are just a few of the more than 100 U.K.-based suppliers for the program.”

Given those numbers and such facts, it isn’t clear why the MoD is so eager to scale back. While it is true the Tempest will be an advanced aircraft and expensive one at that, but it could be well over a decade before it arrives and perhaps longer. It is possible the MoD will change course yet again.