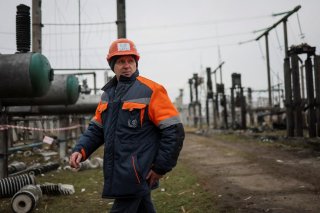 Kyiv is bracing for further attacks as the Russian military doubles down on its concerted effort to destroy Ukraine’s power grid into the winter months.

"We understand that the terrorists are planning new strikes. We know this for a fact," Ukrainian president Volodymyr Zelenskyy said earlier this week. “As long as they have missiles, they, unfortunately, will not calm down.” Zelenskyy said this week could well be as difficult as the one that came before, urging citizens to heed siren alerts. “We have worked out all the scenarios, and our unity must be ready,” he said.

Russian forces launched a massive wave of strikes on critical Ukrainian infrastructure targets last week that left much of the country, including the capital of Kyiv and the far-western Lviv region, without power. The attacks are part of a systematic Russian effort, initiated with an unprecedented round of bombing on October 10, to degrade and destroy Ukraine’s power grid. Russian military experts say the strikes are partially intended to compound logistics challenges for Ukrainian forces, stymying the railway networks used to deliver materiel to the front lines. The attacks are reportedly calibrated for a cumulative effect, aiming to gradually reduce the overall stability of Ukrainian energy infrastructure.

Ukrainian officials said the Russian strikes, which have left swathes of Ukraine’s population without access to heat, water, and electricity into the winter months, amount to “energy genocide.” Ukrainian energy minister German Galushchenko told the Independent last month that Russia “cannot win on the battlefield by giving in to our armed forces, so it has decided to go down the path of energy genocide.” The Russian military is “intentionally attacking our energy facilities right now, when the cold has started and energy supply is of particular value to citizens. Their plan is to sow not only darkness but also despair among Ukrainians,” Galushchenko added.

Russian president Vladimir Putin “is trying to use winter as a weapon of war," NATO Secretary-General Jens Stoltenberg said during a two-day meeting of NATO foreign ministers in the Romanian capital of Bucharest. “We have delivered generators, we have delivered spare parts, and Allies are in different ways helping to rebuild the destroyed infrastructure,” Stoltenberg said, noting the “huge task” of restoring Ukraine’s power grid in the face of relentless Russian attacks. U.S. Secretary of State Antony Blinken announced on Monday that the Biden administration is sending $53 million to help shore up Ukrainian energy infrastructure. The aid package will reportedly include transformers, circuit breakers, surge arresters, disconnectors, vehicles, and other equipment, according to a State Department fact sheet.