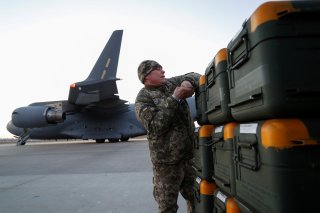 Kiev has received a shipment of anti-aircraft missile systems from Lithuania, according to Ukraine’s Defense Ministry.

Ukrainian Defense Minister Oleksii Reznikov tweeted on Sunday that the Ukrainian military took delivery of about one hundred and eighty tons of ammunition from the United States. Reznikov added on Twitter that Ukraine has so far received 1,500 tons of ammunition spread across seventeen flights.

The shipments come amid an ongoing military standoff between Moscow and Kiev. President Joe Biden reportedly told Western leaders that the Russian forces massing along Ukraine’s eastern borders could invade as soon as February 16. Moscow has consistently denied allegations that it is planning to attack Ukraine, insisting that it has the right to move its troops within Russian borders as it sees fit.

Western governments have troop deployments to defend Ukraine, but several North Atlantic Treaty Organization (NATO) members continue to supply Kiev with lethal aid in a bid to deter a Russian invasion or impose costs if an invasion moves forward. Estonia is sending Javelin anti-tank missiles to Ukraine, while Poland has approved dispatching an array of ammunition and air-defense weapons.

Great Britain has sent short-range infantry anti-tank weapons. British defense minister Ben Wallace told his Russian counterpart Sergei Shoigu in a meeting last week that these systems are defensive in nature and would only become tactically relevant if Moscow decided to invade Ukraine.

Washington has taken steps to bolster NATO’s eastern front to guard against any spillover effects from a possible Russian attack on Ukraine. Up to 3,000 troops American troops have deployed to Poland, Romania, and Germany. The first U.S. reinforcement troops arrived at Rzeszow military base in southeastern Poland earlier this month. NATO announced in late January that several members are sending forces to reinforce the alliance’s military presence in Eastern Europe, including two F-35 Lightning II fighters from the Netherlands, four F-16 fighters and a frigate from Denmark, and an unspecified number of warships from Spain.

Washington ordered the evacuation of most of its embassy staff in Kiev on Saturday and announced on Monday that the embassy would close and relocate within Ukraine to Lviv. National security adviser Jake Sullivan urged American citizens in Ukraine to depart the country as soon as possible using commercial means.

Sullivan predicted that a Russian ground invasion will likely be prefaced with bomb and missile strikes.

"Those are never as precise as the army -- any army -- would like them to be. We don't even know how precise the Russian army would like them to be," Sullivan added. "Innocent civilians could be killed regardless of their nationality. It would then be followed by an onslaught of a ground force moving across the Ukrainian frontier.”